The goal of the competition is to demonstrate the most profitable way to make products from carbon dioxide to defray the cost of keeping the gas out of the atmosphere. 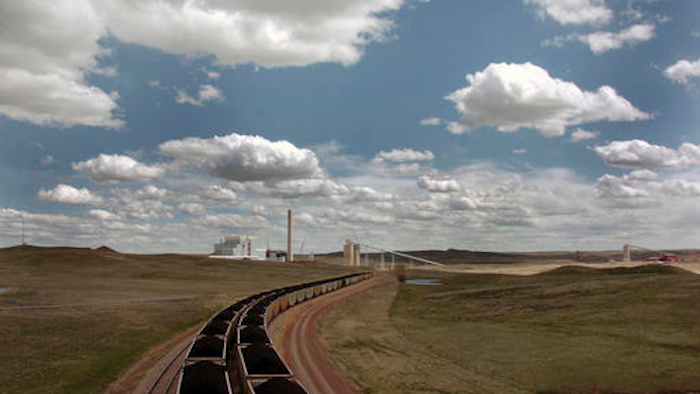 In this Thursday, April 29, 2010 file photo, a pair of coal trains idle on the tracks near Dry Fork Station, a coal-fired power plant being built by the Basin Electric Power Cooperative near Gillette, Wyo. Teams from Canada, China, Finland, India, Scotland, Switzerland and the U.S. have submitted 47 proposals for the first round of a $20 million contest to put power-plant emissions to profitable use, NRG COSIA Carbon XPRIZE officials announced Wednesday, July 27, 2016.
AP Photo/Matthew Brown, File

CHEYENNE, Wyo. (AP) — Cooking oil and graphene, a recently discovered substance stronger than steel, might seem to have little in common, but some theorize both could be made from carbon dioxide emitted by coal- and gas-fired power plants.

Teams from Canada, China, Finland, India, Scotland, Switzerland and the U.S. have submitted 47 proposals for the first round of a $20 million contest to put power-plant emissions to profitable use, NRG COSIA Carbon XPRIZE officials announced Wednesday.

NRG is a major U.S. energy company based in Houston, Texas. COSIA stands for the Canadian Oil Sands Innovation Alliance, a group of companies developing the Canadian oil sands.

The first round of competition will be a technical and business viability review on paper. Up to 30 teams will advance to the second round, which will involve using simulated flue gas in a lab.

The goal is to demonstrate the most profitable way or ways to make products from carbon dioxide to defray the cost of keeping the gas out of the atmosphere. The winner of each side of the competition — the gas-fired power plant side or the coal-fired one — will get a $7.5 million grand prize.

Nine trained scientists from business and academia will decide the winners at each turn.

Entries were due July 15. Teams have emerged from academia, private business, startups — even a father-and-son partnership — with ideas for new building materials, fuel sources, plastic products and more:

"Those materials are so new there's not sort of a technical process for how to make them," Extavour said. "It's really cool to see people really kind of swinging for the fences."

The state of Wyoming has pledged $15 million to help modify Basin Electric's Dry Fork Station coal-fired power plant near Gillette to host carbon-capture research. XPRIZE, which is perhaps best known for holding contests to encourage private exploration of space, will be the facility's first tenant.