In light of global climate change, researchers believe that the devastation brought on by floods and droughts will only become more frequent and intense. 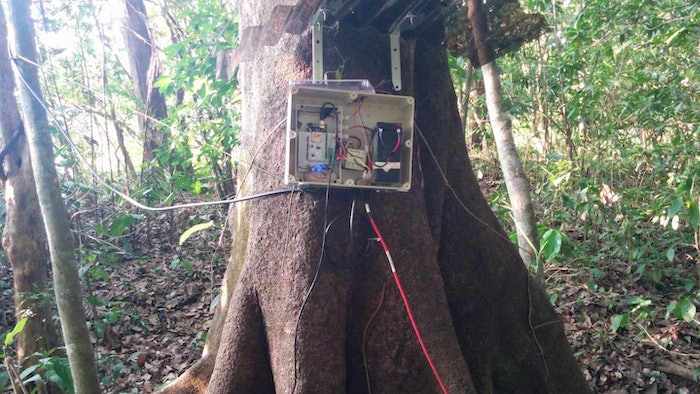 Automated data loggers were installed in the challenging conditions of the tropical wet-dry forest, here on private property along the Potrero River, Costa Rica.
Silja Hund

Communities around the world are familiar with the devastation brought on by floods and droughts. Scientists are concerned that, in light of global climate change, these events will only become more frequent and intense.

Water variability, at its worst, can threaten the lives and well-beings of countless people. Sadly, humans cannot control the weather to protect themselves. But according to Silja Hund, a researcher at the University of British Columbia, communities can build resilience to water resource stress.

Hund studies the occurrence and behavior of water. In particular, she studies rivers and streams. These have features (like water volume) that can change quickly. According to Hund, it is essential for communities to understand local water systems. Knowledge of water resources is helpful in developing effective water strategies. And one of the best ways to understand dynamic water bodies like rivers is to collect lots of data.

The process of collecting water data is hydrologic monitoring. In general, characteristics of rivers and streams should be measured often and over a long timeframe. Frequent measurements help scientists monitor water levels that rapidly rise and fall during storm events.

Measurements over long periods can highlight hidden trends. One example is observing a steady decrease in water volume with time. Observing multiple areas within a river system is also useful, as water characteristics can vary with location.

But adequate monitoring of rivers and streams is too demanding for humans to do alone. Can you imagine measuring water temperature at one point in a stream every ten minutes, 24 hours a day, and seven days a week for several years? It's just not practical!

Clearly, automatic data loggers are often better options for water scientists. There is a downside, though. They are expensive. The baseline cost for a logger is around $450. Hund says this is one reason "continuous automated hydrologic monitoring is still limited in many watersheds around the world."

Many communities are especially vulnerable to floods and droughts because of limited access to data from automatic loggers. They are left with the challenge of improving water resilience with a potentially shortsighted understanding of their water supply. To address this concern, Hund and her colleagues developed an affordable logger using open-source hardware.

To Hund, an advantage of her team's data logger is its relatively low cost. "This allows the installation of more monitoring stations than would have been possible otherwise," she says.

Open-source products offer free instructions to anyone wanting to build or enhance the products for a specific use. The only cost to the user is associated with purchasing needed materials. Hund explains, "Open-source technologies are important for advancing hydrologic research. By sharing not only the results, but also the tools, researchers can contribute significantly to advancing reproducibility of their research, sharing knowledge and experience, and contributing to and benefiting from the exchange within the open-source community."

To test their logger, Hund and her team went to Guanacaste, Costa Rica. They chose the area because of its wet-dry tropical climate and its lack of stream flow data. Guanacaste was also appropriate because water shortages are a common issue there, especially during the dry season. It is no surprise that water supply is heavily contested there, particularly between households and farmers.

The results? Hund and her team reported that their open-source loggers performed well in Guanacaste's intense tropical environment. They were able to capture high-frequency stream data for long periods of time without interruptions. The development of their logger is just one piece of a larger monitoring project in Costa Rica. Beyond this project, Hund says that open-source technologies are picking up quickly in the world of managing water resources.