The spaceship will receive a dose of radiation stronger than 100 million dental X-rays, which would be lethal to today’s typical microelectronics. 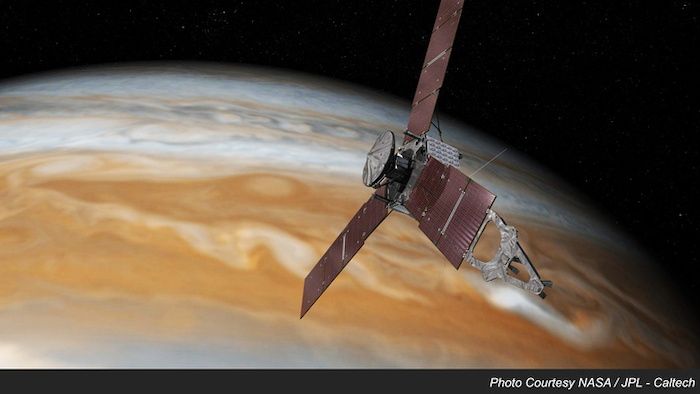 With a magnetic field 20,000 times stronger than that of Earth, Jupiter presents a hostile environment for any nearby satellite electronics.

Despite the challenging conditions, on July 4, 2016, NASA’s Juno satellite established orbit around the massive gas giant to study its structure and evolution, thanks in part to BAE's radiation-hardened RAD750 single-board computer.

After a journey of nearly five years and 2 billion miles, Juno will spend the next 20 months exploring our biggest neighbor, using its suite of scientific instruments to look for evidence of a solid planetary core, map the planet’s intense magnetic field, and measure the amount of water in the atmosphere.

Over the course of Juno’s 30+ orbits around Jupiter during the next year and a half, the spaceship will receive a dose of radiation stronger than 100 million dental X-rays, which would be lethal to today’s typical microelectronics.

To help protect its sensitive electronics from the intense electromagnetic waves, the spacecraft is fitted with a protective titanium vault with walls about one centimeter thick. That’s where the RAD750 and other critical electronics components reside.

The RAD750 processor serves as the main computer for Juno, operating at 132 megahertz with 128 megabytes of DRAM local memory.

While those numbers may not seem impressive by Earth standards, unlike its terrestrial counterparts, the rad-hard RAD750 processor can withstand radiation doses a million times stronger than a fatal human dose.

The Juno mission is the latest in a long line of high-profile achievements of BAE's space electronics capabilities. The company has been delivering radiation-hardened space processors for 20 years, and its electronics have been deployed in more than 250 satellites supporting more than 50 different missions, including the Deep Impact space probe, the Kepler space observatory, and the Mars Reconnaissance Orbiter.