Researchers uncovered a surprising insight into the mechanics of locomotion, taming instability. 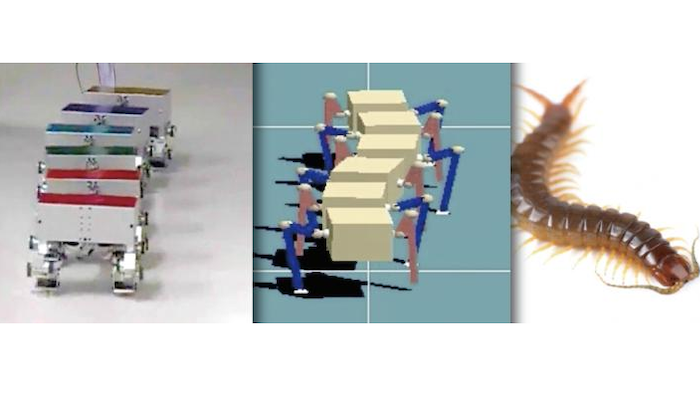 What makes centipedes move with such agility? Researchers at Kyoto University have used simulations and robotics to find the answer -- and a surprising truth.
Kyoto University

Centipedes move quickly. And when one is coming directly at you, you might not care to spend a moment pondering its agility.

So perhaps our lack of understanding about just why centipedes move with such dexterity, even over obstacles, has been related to fear. But undeterred, researchers at Kyoto University have asked precisely this question, and have turned to computer simulations and ultimately robotics to find an answer.

What they have uncovered is a surprising insight into the mechanics of locomotion itself, namely that taming instability -- a factor that might be a disadvantage -- is a key to the centipede's success.

"Our group developed a mathematical model of centipedes and found that the straight walk becomes unstable and body undulations appear through a supercritical Hopf bifurcation by changing the locomotion speed and body axis flexibility," continues Aoi, referring to a mathematical description of the walking system's tipping point from stable to unstable.

First with computer models and then with segmented, multi-legged robots, the team was able to replicate the centipede's movement, including the wave-like body motion, as described in a paper in the online journal Scientific Reports.

But Aoi and his colleagues are not satisfied with merely taming creepy crawlies.

"This study provides clues to unresolved issues of intelligent motor functions of animals, and meaningful insight for biological sciences," he says, pointing out that much remains unknown about the exact mechanics of animal locomotion.

And further down the line, such knowledge could lead to better motion for robots -- no matter how many legs they may have.