The project faces up to $223 million in cost overruns. 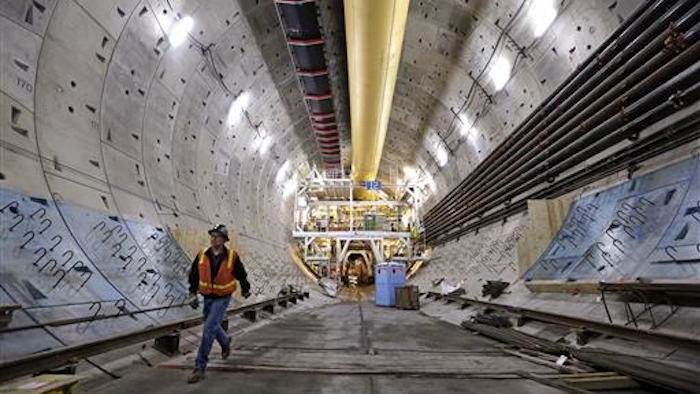 In this photo taken April 25, 2016, a worker walks inside the State Route 99 tunnel under construction in Seattle. The troubled project to replace Seattle's Alaskan Way Viaduct is $223 million over budget, the Washington state Department of Transportation said Thursday, July 21, 2016. The original completion date for the tunnel was the fall of 2015, but the latest estimate for the opening of the double-decker highway project is in 2018.
AP Photo/Elaine Thompson, File

The additional money is needed for the project, originally budgeted at $3.1 billion, because of repeated delays.

Those delays have increased the administration and oversight costs, made it more expensive to acquire right of ways to build the tunnel and added to the costs of ultimately demolishing the viaduct, the state Department of Transportation said.

The project has an immediate cash flow need of $60 million, the transportation department said.

The Seattle tunnel was the preferred choice to replace the viaduct when it was damaged in a 2001 earthquake. But the tunnel boring machine broke down in late 2013, leading to a more than two-year delay while it was fixed.

The original completion date for the tunnel was the fall of 2015 but the opening of the double-decker highway project is now projected for early 2019.

When completed, the 2-mile tunnel that motorists would pay tolls to use would go from an area near Seattle's sports stadiums to a neighborhood north of downtown.

It would also open up the city's waterfront, currently walled off by the 1950s-era Alaskan Way Viaduct, to development and parks. More than 100,000 vehicles a day currently use the multilane bridge.

State lawmakers were briefed about the cost overruns Thursday afternoon, and some expressed frustration.

"How are you ever going to earn the trust of the taxpayers?" Rep. Ed Orcutt, R-Kalama, asked Roger Millar, the acting transportation secretary.

Millar said the agency was committed to completing the project and protecting taxpayers.

The 2-mile tunnel is being constructed by Seattle Tunnel Partners under a design build contract, under which the company building the tunnel is supposed to be responsible for any costs over the original budget.

Millar said the state would try to recover the added costs to the project by pursuing insurance claims and going to court. The state last year sued STP in King County Superior Court following court filings by STP and its insurance companies.

The upcoming legal battles are likely to focus on who was ultimately responsible for the two-year delay caused by the breakdown of the tunnel boring machine, known as Bertha.

"We have an issue, it is not a shock," she said at a Thursday hearing. "We also have revenues that we should have at our disposal in the future."

Jaime Smith, spokeswoman for Gov. Jay Inslee, said in a statement that the transportation department will work with the Legislature to secure the $60 million needed quickly in the next two-year budget period.

"Hopefully the project continues to progress, and we can look at options for recovering some of those funds at the end of the project," Smith said.