This would give them the same flexibility to control the complex machine's output that's common for 3D printers.

Software developed by Disney Research enables users to readily program industrial knitting machines, giving them the same flexibility to control the complex machine's output that already is commonplace for computer-controlled machine tools and for 3D printers.

The compiler software allows users to specify designs based on simple shapes such as sheets and tubes and then translates those specifications into the needle-level instructions necessary to operate the machines.

"Machine knitting is a mature technology used to create everything from gardening gloves to fashion sweaters," said Jessica Hodgins, vice president at Disney Research. "But we've shown that the versatility of these machines - and the ability of people to express themselves through the machines - can be greatly enhanced by changing the way they are programmed."

Knitting machines use hundreds of needles, working in precise synchrony, to interconnect loops of yarn, producing finely detailed, seamless fabrics. Though programmable, they are almost always are used to manufacture many of the same object, rather than completely custom shapes, said James McCann, associate research scientist at Disney Research.

"One of the great advantages of knitting is that it need not be flat," McCann said. Changing the number of stitches in a course or knitting partial courses in a tube can result in a variety of 3D shapes. But given existing control processes, those sorts of changes require the user to make needle-level adjustments that can be complex and tedious.

McCann and his colleagues will present their compiler system July 24 at the ACM International Conference on Computer Graphics & Interactive Techniques (SIGGRAPH) in Anaheim, Calif.

The Disney team developed a number of high-level shape primitives that can be used to specify the shape and size of a knitted object and created a knitting assembly language that captures capabilities common to industrial machines. They also created a graphic design interface for assembling these primitives. The compiler software can then translate these specifications into needle-level instructions.

They used this system to produce a number of hats, gloves and other pieces of clothing, as well as toys such as a helical snake and a teapot with a curved spout and handle.

Today's consumer-level knitting machines are not yet sophisticated enough to make use of this compiler system, but McCann said it could make it much easier for users to send knit jobs to a central location for industrial machine processing.

"We believe that 3D machine knitting should one day join 3D printing as a user-accessible form of additive fabrication," he said. "Getting it there will require new tools, algorithms and data exchange formats, of which our compiler, transfer planning algorithm and knitting assembly languages are the first examples."

In addition to Hodgins and McCann, the research team included Lea Albaugh and Vidya Narayanan of Disney Research; April Grow, an intern at Disney Research and a Ph.D. student in computer science at the University of California, Santa Cruz; Wojciech Matusik, associate professor of electrical engineering and computer science at MIT, and Jen Mankoff, associate professor in Carnegie Mellon University's Human-Computer Interaction Institute. 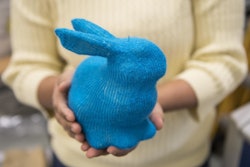 The 3D Printer of Knitting Machines