Engineering Researchers Use Acoustic Voxels to Embed Sound with Data

Like Legos, acoustic voxels can be connected to form an infinitely adjustable, complex structure. 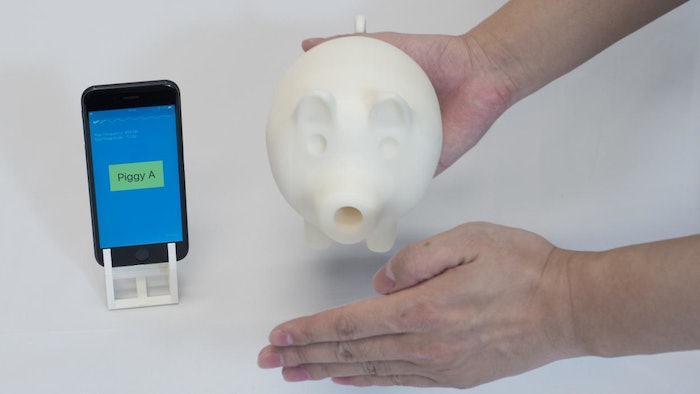 By optimizing the structure of acoustic voxels, Columbia Engineering researchers can control the acoustic response of an object when it is tapped and thereby tag the object acoustically. Given three objects with identical shapes, they can use a smartphone to read the acoustic tags in real-time, by recording and analyzing the tapping sound, and thereby identify each object.
Changxi Zheng/Columbia Engineering

Columbia Engineering researchers, working with colleagues at Disney Research and MIT, have developed a new method to control sound waves, using a computational approach to inversely design acoustic filters that can fit within an arbitrary 3D shape while achieving target sound filtering properties.

Led by Computer Science Professor Changxi Zheng, the team designed acoustic voxels, small, hollow, cube-shaped chambers through which sound enters and exits, as a modular system. Like Legos, the voxels can be connected to form an infinitely adjustable, complex structure.

Because of their internal chambers, they can modify the acoustic filtering property of the structure--changing their number and size or how they connect alters the acoustic result.

"In the past, people have explored computational design of specific products, like a certain type of muffler or a particular shape of trumpet," says Zheng, whose team is presenting their paper, "Acoustic Voxels: Computational Optimization of Modular Acoustic Filters," at SIGGRAPH 2016 on July 27. "The general approach to manipulating sound waves has been to computationally design chamber shapes. Our algorithm enables new designs of noise mufflers, hearing aids, wind instruments, and more -- we can now make them in any shape we want, even a 3D-printed toy hippopotamus that sounds like a trumpet."

He adds, "We also have proposed a very intriguing new way to use acoustic filters: we can use our acoustic voxels as acoustic tags, unique to each piece we 3D print, and encode information in them. This is similar to QR codes or RFIDs, and opens the door to encoding product and copyright information in 3D printing."

Last year, Zheng's team used computational methods to design and 3D-print a zoolophone, a xylophone-type instrument with keys in the shape of zoo animals. The zoolophone represented fundamental research into vibrational sound control, leveraging the complex relationships between an object's geometry and the surface vibrational sounds it produces when struck.

In this new study, Zheng's team came up with a computational approach that would enable better design for manipulating acoustic propagation of many products, such as automobile mufflers and instruments.

"With 3D printers today, geometric complexity is no longer a barrier. Even complex shapes can be fabricated with very little effort," Zheng notes. "So the question is: can we use complex shapes to improve acoustic properties of products?"

The creation of acoustic voxels has also led Zheng's team in a completely new direction: acoustic tagging to uniquely identify a 3D-printed object and acoustic encoding to implant information (like a copyright) into an object's very form.

Acoustic filters work by manipulating sound waves; acoustic voxels have given the team a way to exactly control that manipulation. A unique voxel assembly produces a unique acoustic signature.

Two objects may have the exact same exterior appearance, but if their hollow interiors contain different voxel assemblies, each object, when filtering a sound wave, produces a sound unique to that object.

The researchers recorded the sound made by objects with different voxel assemblies and used an iPhone app they created to accurately identify each object.

Acoustic tagging could be a valuable complement to QR codes and RFID tags, both of which entail operations entirely separate from manufacturing. If fabricators can build ID information directly into the object, they will save the time, effort, and expense of individually labeling parts, especially useful when building larger structures from many separate pieces.

Acoustic tagging could also encode copyrighted originals, such as 3D-printed figures from individual artists like Jeff Koons or companies like Disney or Marvel.

Zheng's current acoustic voxels project is for fabricating sizable objects producing audible sounds, and his team has been able to demonstrate how information and identification can be embedded into the acoustics of an object, requiring no additional procedures or labor after fabrication. They are looking ahead to how they might use acoustic voxels to computationally control ultrasound waves. Says Zheng, "We are investigating some of the intriguing possibilities of ultrasonic manipulation, such as cloaking, where sound propagation can be distorted to hide objects from sound waves. This could lead to new designs of sonar systems or underwater communication systems. It's an exciting area to explore."