Without these chips, satellite electronics would be much heavier and require substantially more shielding and power. 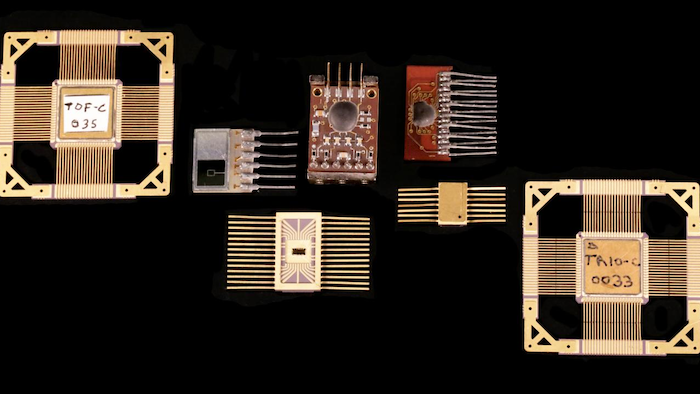 The largest chip in the family of ASICs is barely the size of a saltine cracker. These microchips have been radiation-hardened to withstand the harsh radiation environments in space.
NASA's Goddard Space Flight Center/Joy Ng

As NASA spacecraft explore deeper into space, onboard computer electronics must not only be smaller and faster, but also be prepared for extreme conditions.

A prime example is shown in these images: a family of Application Specific Integrated Circuits, or ASICs, microchips specifically designed to measure the particles in space - the very stuff that can create radiation hazards for satellite computers.

These tiny, radiation-resistant chips play a crucial role in one of the instruments nestled inside the radiation-shielded electronics vault on NASA's Juno spacecraft - which entered Jupiter's orbit on July 4.

The microchips aboard Juno are part of the Jupiter Energetic Particle Detector Instrument, or JEDI, a cutting-edge instrument that will measure the composition of the immense magnetic system surrounding the planet, called a magnetosphere.

The ASICs measure the speed, energy and position of particles and photons in space with time accuracy down to a fraction of a billionth of a second. The largest chip is barely the size of a saltine cracker.

Without these chips, satellite electronics would be much heavier and require substantially more shielding and power - potential problems for any satellites traveling into space.

"Before my work, you had electronics that were very big - over two pounds," said Nikolaos Paschalidis, a space scientist at NASA's Goddard Space Flight Center in Greenbelt, Maryland. Paschalidis conceived of and first developed ASICs when he worked at the Johns Hopkins Applied Physics Laboratory in Laurel, Maryland. "A great deal of my early work was on miniaturization of space instruments and systems with advanced technologies like electronics onto a microchip."

Paschalidis is the chief technologist for heliophysics at Goddard. Heliophysics is the study of the sun and how it affects the particles and energy in space. Far from being empty, the space surrounding planets is filled with fast moving particles and a complex electromagnetic system often driven by the sun.

Near Jupiter, this system includes intense aurora and giant radiation belts surrounding the gas giant. It's the job of JEDI, led by Barry Mauk at the Johns Hopkins Applied Physics Laboratory, to observe this complex system.

Better understanding of a planet's space environment helps us understand how it was formed and continues to evolve. Moreover, it helps us learn more about how to prepare spacecraft to travel through such harsh radiation conditions.

Juno isn't the first spacecraft to carry these microchips. ASICs have been incorporated in many other NASA missions to study a diverse range of space environments from close to the sun to the heart of Earth's radiation belts to the edge of the solar system.

However, the Juno mission required a significant advance in ASIC performance over prior spaceflight electronics: The Juno ASICs were specially developed to be radiation-hardened, enabling them to withstand the harsh, radiative environment of Jupiter's magnetosphere where high-energy particles constantly bombard objects and deposit large doses of radiation.