Most commercial wearables only measure one signal, and almost none of them measure chemical signals. 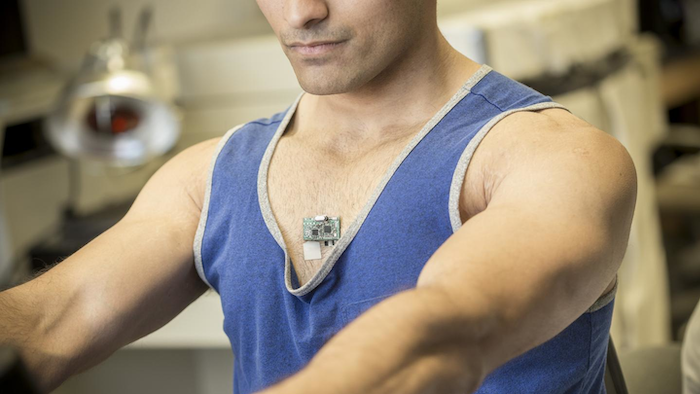 Study co-author Amay Bandodkar wears the ChemPhys patch while using an exercise bike in a lab at the Center for Wearable Sensors.
Jacobs School of Engineering/UC San Diego

Engineers at the University of California San Diego have developed the first flexible wearable device capable of monitoring both biochemical and electric signals in the human body.

The Chem-Phys patch records electrocardiogram (EKG) heart signals and tracks levels of lactate, a biochemical that is a marker of physical effort, in real time. The device can be worn on the chest and communicates wirelessly with a smartphone, smart watch or laptop. It could have a wide range of applications, from athletes monitoring their workouts to physicians monitoring patients with heart disease.

Nanoengineers and electrical engineers at the UC San Diego Center for Wearable Sensors worked together to build the device, which includes a flexible suite of sensors and a small electronic board. The device also can transmit the data from biochemical and electrical signals via Bluetooth.

Nanoengineering professor Joseph Wang and electrical engineering professor Patrick Mercier at the UC San Diego Jacobs School of Engineering led the project, with Wang's team working on the patch's sensors and chemistry, while Mercier's team worked on the electronics and data transmission. They describe the Chem-Phys patch in the May 23 issue of Nature Communications.

"One of the overarching goals of our research is to build a wearable tricorder-like device that can measure simultaneously a whole suite of chemical, physical and electrophysiological signals continuously throughout the day," Mercier said. "This research represents an important first step to show this may be possible."

Most commercial wearables only measure one signal, such as steps or heart rate, Mercier said. Almost none of them measure chemical signals, such as lactate.

That is the gap that the sensor designed by researchers at the Jacobs School of Engineering at UC San Diego aims to bridge. Combining information about heart rate and lactate--a first in the field of wearable sensors--could be especially useful for athletes wanting to improve their performance. Both Mercier and Wang have been fielding inquiries from Olympic athletes about the technologies the Center for Wearable Sensors produces.

"The ability to sense both EKG and lactate in a small wearable sensor could provide benefits in a variety of areas," explained Dr. Kevin Patrick, a physician and director of the Center for Wireless and Population Health Systems at UC San Diego, who was not involved with the research. "There would certainly be interest in the sports medicine community about how this type of sensing could help optimize training regimens for elite athletes," added Patrick, who is also a member of the Center for Wearable Sensors. "The ability to concurrently assess EKG and lactate could also open up some interesting possibilities in preventing and/or managing individuals with cardiovascular disease."

The researchers' biggest challenge was making sure that signals from the two sensors didn't interfere with each other. This required some careful engineering and a fair bit of experimentation before finding the right configuration for the sensors.

Researchers used screen printing to manufacture the patch on a thin, flexible polyester sheet that can be applied directly to the skin. An electrode to sense lactate was printed in the center of the patch, with two EKG electrodes bracketing it to the left and the right.

Engineers went through several iterations of the patch to find the best distance between electrodes to avoid interference while gathering the best quality signal. They found that a distance of four centimeters (roughly 1.5 inches) between the EKG electrodes was optimal.

Researchers also had to make sure the EKG sensors were isolated from the lactate sensor. The latter works by applying a small voltage and measuring electric current across its electrodes.

This current can pass through sweat, which is slightly conductive, and can potentially disrupt EKG measurements. So the researchers added a printed layer of soft water-repelling silicone rubber to the patch and configured it to keep the sweat away from the EKG electrodes, but not the lactate sensor.

The sensors were then connected to a small custom printed circuit board equipped with a microcontroller and a Bluetooth Low Energy chip, which wirelessly transmitted the data gathered by the patch to a smartphone or a computer.

The patch was tested on three male subjects, who wore the device on their chest, near the base of their sternum, while doing 15 to 30 minutes of intense activity on a stationary bike. Two of the subjects also wore a commercial wristband heart rate monitor.

Next steps include improving the way the patch and the board are connected and adding sensors for other chemical markers, such as magnesium and potassium, as well as other vital signs.

Physicians working with Wang and Mercier are also excited about the possibility of analyzing the data from the two signals and see how they correlate.