Fuel cells can create power in an environmentally friendly mode without the use of any outside power. 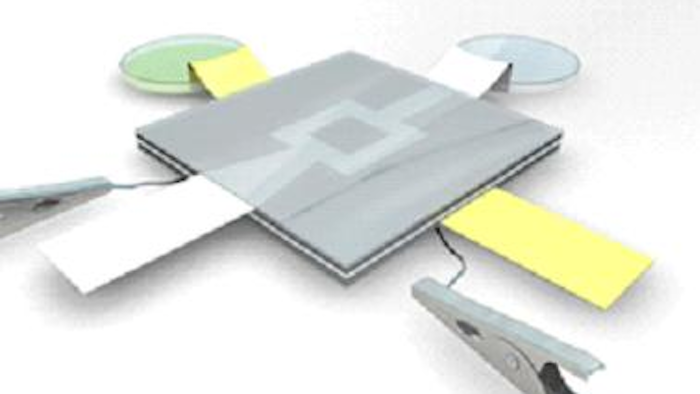 The device allows flow of the streams of Shewanella Oneidensis MR-1 (yellow) and the Potassium Ferricyanide (white) into the chambers. Proton exchange membrane is placed between the two chambers to separate the two liquids as well as allow the positively charged ions released in the biocatalytic breakdown of the anolyte to flow from the anode to the cathode.
TECHNOLOGY

A team of researchers from the Iowa State University in Ames, IA has demonstrated a proof-of-concept three-dimensional paper-based microbial fuel cell (MFC) that could take advantage of capillary action to guide the liquids through the MFC system and to eliminate the need for external power. Their report appears in the forthcoming issue of the journal TECHNOLOGY.

The paper-based MFC runs for five days and shows the production of current as a result of biofilm formation on anode. The system produces 1.3 μW of power and 52.25 μA of current yielding a power density of approximately 25 W/m3 for this experiment.

These results show that the paper-based microbial fuel cells can create power in an environmentally friendly mode without the use of any outside power.

"All power created in this device is useable because no electricity is needed to run the fluids through the device. This is crucial in the advancement of these devices and the expansion of their applications." says Nastaran Hashemi, PhD, Assistant Professor of Mechanical Engineering and the senior author of the paper.

The biofilm formation on the carbon cloth during the test provides further evidence that the current measured was the result of the bio-chemical reaction taking place. This is important because the biofilm plays a vital role in current production of a microbial fuel cell. Increased biofilm size and thickness ultimately leads to increased current production. Individual bacterial cells metabolize electron-rich substances in a complex process involving many enzyme-catalyzed reactions.

The electrons are then free to travel to the anode through one of many modes of electron transport. Electron transport is very complicated, and evidence suggests that it is unique to each type of bacteria. For Shewanella Oneidensis MR-1, the most predominantly known ways of shuttling electrons from the individual bacteria cells to the anode are through direct contact, excreted soluble redox molecules, and biological nanowires. Of these, it is widely believed that excreted soluble redox molecules serving as extracellular electron shuttles makes up for as much as 70% of electron transfer mechanisms from individual bacterial cells to the electrode.

Moreover, it is shown that direct contact between individual S. Oneidensis MR-1 and the electrode has little impact on the current generation, supporting a mediated electron transfer mechanism. Biofilm helps with the adsorption of the redox molecules to the electrode, which makes it important to have in high power density microbial fuel cells.

There are not many studies on power production from paper-based microbial fuel cells running for few days. Without enough time for biofilm to form, the reported current and power data would predominantly be associated with extracellular electron transfer, which represents does not fully represent electrical producing capabilities of microbial fuel cells.

This device for the first time demonstrates the longer duration of use and ability to operate individually, a development that could help increase the number of situations where microbial fuel cells can be applied.

The Iowa State University team is currently exploring options to better control the voltage output and create constant current. Controlled environment tests will aid in the regulation of the systems output and yield more stable results.

For optimal usability and decrease in cost, the team would also like to explore a device that would not need to use Nafion and Potassium Ferricyanide in its application. Additional co-authors of the paper are Niloofar Hashemi, Joshua Lackore, Farrokh Sharifi, Payton Goodrich, and Megan Winchell.