System projects a Cartesian plane onto a white floor mat for a LEGO robot named Quinn to navigate. 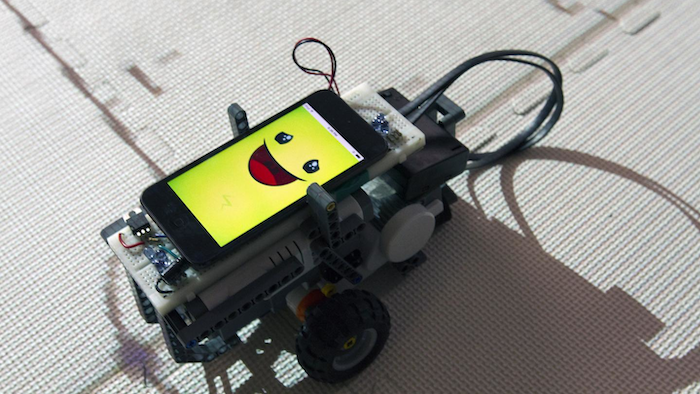 Computer technology has become integral to the learning process.

With the advent of tablet and hand-held computing devices, this ratio is fast approaching 1 to 1.

Up until very recently, mainstream educational software for computing devices in the classroom has been designed based upon a style of interaction utilizing the traditional WIMP (window, icon, menu, pointing device) paradigm.

Student engagement is then an isolated one-on-one experience, individual student to individual machine.

To better engage students with their environment through educational technologies, researchers have begun exploring a variety of solutions that provide more embodied and tangible interactions--ranging from collaborative activities surrounding an interactive tabletop, to interactive robots that teach language learning.

"Successful integration of any new technology into the classroom environment requires an understanding of the facilitators for and barriers to deployment," says Winslow Burleson, PhD, associate professor, New York University Rory Meyers College of Nursing, the Principal Investigator on the study. "While such technologies are shown to be highly engaging for students and perhaps foster learning in new ways, our research looks at the need to understand the far-reaching utility of these technologies, particularly in classroom settings."

In order to examine how the utility of one such solution played out in a classroom setting, Burleson teamed up with researchers from Arizona State University and Carleton University to study the implementation of a tangible learning environment that utilizes teachable agent framing coupled with a physical robotic agent--Robo-Tangible Activities for Geometry (rTAG).

How Does it Works?

rTAG projects a Cartesian plane onto a white floor mat, upon which a LEGO robot named Quinn navigates. An iPod Touch mounted on top of the LEGO components displays Quinn's face and outputs its voice, through which it can give effective responses.

To issue a command to Quinn, students must first touch the mounted iPod, which will trigger a popup on the mobile interface, where they can choose from a variety of actions, including: move units, turn and plot point.

Before using the system, students are told they must help Quinn solve a geometry problem. After plotting the point, students can check if their solution is correct by tapping on the "Check Answer" button on the mobile interface, triggering Quinn's visual and audio response.

To test both the efficacy and feasibility of the rTAG system, the researchers developed a virtual platform called vTAG, encompassing the same features, but all the interactions and actions take place through a regular WIMP-based interface, on a single screen divided into three sections for the plane, Quinn's face, and command line. Together, the rTAG and vTAG versions form the TAG system.

Researchers conducted a week-long study to evaluate the impact of the TAG system in a school setting, inviting teachers from a California public school district to bring their students to one or more sessions.

Twelve teachers, from four different schools, took the researchers up on their offer. Classes had 25-40 students, with eight classes from 3rd, three from 4th and one from 5th grade. Sessions were held in a room with one rTAG and three vTAG modules setup.

To better understand the affordances and limitations of integrating the TAG system within a school setting, researchers analyzed how teachers planned their lessons around the TAG system and how teachers used the rTAG setup, and if it differed from the more common vTAG setup.

"From the twelve sessions we held, we found most teachers did not give students an introduction to the TAG system prior to their session, however some chose to impart domain knowledge such as angle and coordinates, ahead of the session" said Cecil Lozano, PhD, Arizona State University.

In terms of the session introduction, every teacher had their students gather around a specific station, generally a vTAG one, and would explain how the system worked, half of the teachers opted to have a researcher explain the system instead.

The only exception to this method was one instance in which a teacher had a "very tech savvy" student man the station while she explained how it worked. After the demonstration teachers would have their students divvy up into groups and rotate around the stations.

During the experiments, the researchers sought to understand what value teachers placed on the TAG system, and to describe the barriers teachers faced in its implementation.

"Student engagement was, by far, perceived as one of the strongest assets of the system," said Dr. Burleson. "When the time came for students to rotate stations, every time a facilitator asked which group wanted to use the rTAG station next, students would eagerly raise their hands. Furthermore, on group rotation, students who didn't get a chance to interact with Quinn in the rTAG group would loudly express their discontent."

Several teachers perceived the physical robot as a key benefit of the system. One teacher noted her students' excitement for Quinn fomented a session in which students didn't even realize they were learning, "They just think they went and played with a robot." Another teacher noted that personifying Quinn allowed the students to relate to it, motivating students to "persist in a problem and to get Quinn where he was supposed to go."

The researchers posit this heightened engagement may be due to a novelty effect, which they anticipate will subside as students grow accustomed to the system.

Another common theme among teachers was related to the value of exposing students to technology.

"We found many teachers in the school sought students' proficiency in the use of digital tools," said Victor Girotto, PhD, Arizona State University. "To them, this was another opportunity of showing their students some of the affordances made possible by technology, possibly making them more proficient in its use, while also leveraging their curiosity."

Generally, when a group used vTAG, however, only those few close to the monitor were engaged, while the rest would just sit back and watch, or wander around the room. On the physical setup, however, more students usually tried to participate together with the students who were currently using the system.

One teacher noted: "I see eight or nine kids jumping in and trying to help, or looking to see if it's time to touch. It's just they're more involved, more willing to maybe offer a solution." In many rTAG sessions, several students could be seen standing on the foam mat discussing the problem, constantly passing the iPod Touch around and taking turns on who would be interacting with Quinn.

Given the feedback from the teachers and the twelve class sessions, researchers resolved their reflections on the TAG system to four design recommendations, this includes:

"Our findings are in agreement with some previous research, which shows that group experiences appear to foster participation," remarks Dr. Burleson, "so designers should model systems with tangible and embodied elements which explore their affordances to foster collaboration by design, rather than planning for students to individually use the technology."

Researchers also note barriers to rTAG implementation, including lack of time for setup, lack of training for instructors, student intimidation by the rTAG setup, and limitations related to the number of students per station. Specifically, teachers mentioned there were too many students at each station, and particularly prevalent in vTAG stations, some students relegated to a passive viewer role.

While the overall interaction with the system may be unusual and requires specific training, the familiarity with some of the system components (iPods) may help to bring down this barrier, as well as possibly reducing apprehension of using it.

"This allows schools to reuse technology they already have, detracting from the cost of the unit. Furthermore, students' familiarity with existing technology allows them to better understand how the system as a whole functions because they are already familiar with its parts," said Dr. Burleson.