This is the world's first child-exoskeleton for spinal muscular atrophy, which aims to prevent the loss of agility. 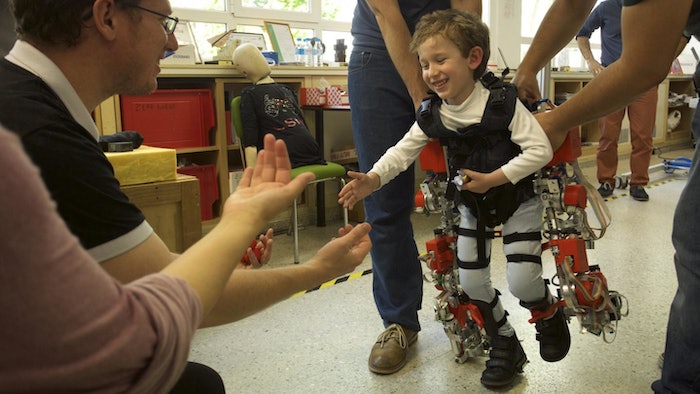 Five-year-old Álvaro, who suffers from spinal muscular atrophy, walks towards his parents during an exoskeleton test.
Joan Costa, CSIC

The frame helps children to walk and aims to prevent the setting in of sclorosis which results from a loss of agility. The technology has been jointly patented and licensed by the Spanish National Research Council (CSIC) and its spin-off, Marsi Bionics.

Furthermore, it will also be used in physiotherapy in hospitals to prevent the secondary effects associated with the loss of mobility in this illness. The technology is currently in the preclinical phase.

The brace consists of long support rods, or orthoses, which are adjusted to fit around the child's legs and torso. In the joints, a series of motors mimic human muscles and give the child the necessary strength to stand upright and walk. Finally, a series of sensors, a movement controller, and a battery with 5 hours of life complete the system.

"The number one drawback in developing this type of paediatric exoskeleton is that the symptoms of neuromuscular illnesses- such as spinal muscular atrophy- change over time, as much in the articulations as in the body.That's why it's fundamental to have an exoskeleton capable of independently adapting to these changes. Our model includes intelligent joints which alter the brace's rigidity automatically and adapt to the symptoms of each individual child at whenever required", explains Elena Garcia, from the Automatics and Robotics Centre, a CSIC/Politechnic Univerity of Madrid.

The exoskeleton is aimed at children between the ages of 3 and 14. With five motors in each leg (each requiring its own space to function), the minimum possible length of each leg is restricted.

Furthermore, the unpredictability of the involuntary body movements of under-3s have forced researchers to set a lower age limit for the device. "In other pathologies, which don't restrict any joint movement and so require fewer motors, it would be possible to build a smaller frame", adds García.

Disease Without a Cure

Spinal muscular atrophy is one of the most serious degenerative neuromuscular diseases in children and, although it is rare, it results in high rates of mortality in the babies and children it affects. It is of genetic origin and causes progressive general muscular weakness.

This loss of strength leaves the child prostrate which is when the most drastic effects of inability to walk set in- such as escoliosis and osteoporosis- which also cause lung dysfunction, jeopardizing the child's survival.

Type 1, the most severe of the three types, is diagnosed in the first few months of life. Babies seldom make it through their first 18 months.

Type 2, which the exoskeleton is aimed at combating, can be diagnosed between the first 7-18 months of life. Children who show symptoms are never able to walk, thus leading to a serious decline in their health. Children's life expectancy is seriously affected by this lack of mobility and any respiratory infection becomes critical to over-twos. There are however cases of some sufferers who reach adulthood.

Diagnosis of Type 3 is made once a child reaches 18 months, although the symptoms don't become evident until adolescence, when sufferers lose the ability to walk. In this final case, life expectancy is normal, though with a reduced quality of life", comments Garcia.

By using the device, Elena García and her team hope to help patients walk and in so doing prevent the setting in of escoliosis, as well as the chain of resulting conditions caused by the inability to stand upright and walk.

With finance coming from the Spanish Ministry of the Economy and Competition, and through the EU's Echord ++ programme, the project is being carried out with the help of medical specialists at the Sant Joan de Déu Children's Hospital in Barcelona and the Ramón & Cajal University Hospital in Madrid.