If you're driving a nanocar on the open road, things are bound to get sticky. 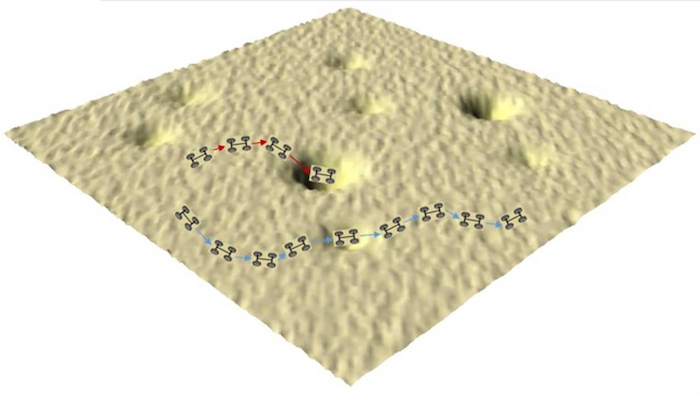 Rice University researchers who developed the first nanocars and colleagues at North Carolina State University found in recent tests that driving their vehicles in ambient conditions - exposed to open air, rather than a vacuum - got dicey after a time because the hydrophobic single-molecule cars stuck to the "road" and created what amounted to large speed bumps.

The findings were reported in the American Chemical Society's Journal of Physical Chemistry C.

The work by Rice chemist James Tour, NC State analytical chemist Gufeng Wang and their colleagues came as Rice prepares to take part in the first NanoCar Race in Toulouse, France, in October (watch video below). Rice researchers are members of one of five international teams that plan to enter the competition.

Just like in the macro world, driving conditions are important for moving nanocars. Though the race will be run in an ultra-cold vacuum, the Rice researchers thought it wise to study how their latest model of nanocars would fare in a more natural setting.

"Our long-term goal is to make nanomachines that operate in ambient environments," Tour said. "That's when they will show potential to become useful tools for medicine and bottom-up manufacturing."

The newest generation of Rice nanocars features adamantane wheels that are slightly hydrophobic (water-repellent). Tour said some hydrophobicity is important to help keep the nanocars attached to a surface, but if the tires are too hydrophobic, the cars could become permanently immobilized. That is because hydrophobic things tend to stick together to minimize the amount of surface area that is in contact with water. Things that are hydrophilic, or water-liking, are more amenable to floating freely in water, Tour said.

In the latest Rice tests with the new tires, the nanocars were placed on surfaces that were either clean glass or glass coated with the polymer polyethylene glycol (PEG). Glass is the most frequently used substrate in nanocar research. Tour said the PEG-coated glass slides were used for their anti-fouling - nonsticky - properties, while the clean glass slides were treated with hydrogen peroxide so the hydrophobic wheels wouldn't stick.

He said the cars weren't so much being driven as undergoing "directed diffusion" in the tests. The point, he said, was to establish the kinetics of nanocar movement and understand the potential energy surface interaction between the car and surface over time.

"We want to know what makes a nanocar 'hit the brakes' and how much external energy we need to apply to start it moving again," he said.

The researchers let their cars run freely on a solid surface exposed to the air and tracked their movements by exciting embedded fluorescent tags.

The cars that moved via Brownian diffusion slowed down during the 24 hours that the slides were under observation. Tour said slides absorbed molecules from the air; as more and more of these molecules stuck to the surface, the slides become progressively more "dirty" throughout the experiment. Each nanocar is a single, complex molecule that contains just a few hundred atoms, so any other molecules they encounter on the roadway are huge obstacles that act like sticky foam. Each collision with one of these obstructions makes the nanocar slow down, and eventually the cars become permanently stuck.

Wang said that from an energy perspective -- that is, the energetic relationship between the molecular cars and those that make up the road -- molecules adsorbed from air generate many potential energy wells, just like puddles on the potential energy surface. These puddles can slow or permanently trap the nanocars.

Tests showed that nearly twice as many of the cars appeared to move on the nonsticking PEG slides, and all moved a little faster than those on the bare glass.

The researchers noted that they could not view the new models with scanning tunneling microscopes because those only work in a vacuum and they emit energy that could influence movement of the cars. For this reason, the researchers tagged each nanocar with a fluorescent marker and used confocal microscopes to track the cars' movements.


NanoCar Race, the first-ever race of molecule-cars by CNRS-en
Related