On Wednesday, Segway will begin taking Amazon pre-orders for a new hoverboard, the MiniPro. 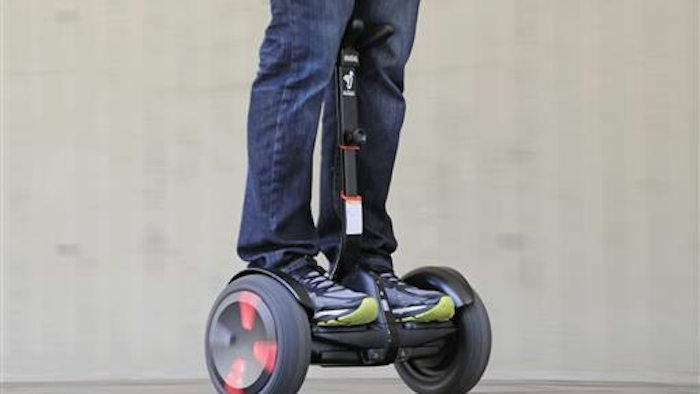 In this May 27, 2016, photo, company representative Zach Servideo demonstrates Segway's new self-balancing scooter, the MiniPro, in downtown Los Angeles. The MiniPro is going on sale on Amazon, Wednesday, June 1, 2016. Hoverboards are attempting a comeback in the U.S., months after videos showing them bursting into flame went viral.
AP Photo/Reed Saxon

LOS ANGELES (AP) — Don't look now, but hoverboards are angling for a comeback.

Months ago, the powered scooters — which balance themselves but don't actually "hover" — largely vanished from the U.S. market after they exhibited a distressing tendency to burst into flame. Now, though, Segway and other manufacturers want consumers to give hoverboards a second chance.

On Wednesday, Segway — which also makes the eponymous upright scooter beloved by mall cops and airport security — will begin taking Amazon pre-orders for a new hoverboard, the MiniPro. Although the boards won't actually ship until July, it's a significant step, given that Amazon, Walmart and other retailers dumped the products months ago after videos of burning hoverboards went viral.

The MiniPro and other new scooters have passed new safety standards designed to prevent fires. But that doesn't mean they're completely safe — nor that manufacturers like Segway can overcome their enormous image problems.

Few consumer products have zoomed in from nowhere, only to literally crash and burn, as quickly as hoverboards did. Produced by little-known companies, the scooters shot to prominence late last year after a host of celebrities from Justin Bieber to Jamie Foxx were seen riding on them. Small manufacturers in China, which can quickly clone popular products, flooded the market with lookalikes.

Then came the fires and embarrassing falls by the likes of Kendall Jenner and Mike Tyson. Florida congressman Carlos Curbelo tweeted a post-Christmas picture of his arm in a sling with the message, "#hoverboard is for kids. My daughter got it. I ended up in @BaptistHealthSF."

Since last August, the Consumer Product Safety Commission counts at least 62 hoverboard-related fires and an estimated 7,200 falls that required emergency-room visits. It's still investigating 13 hoverboard makers, including Chinese companies such as Yooliked and Keenford Ltd. Many municipalities, airports and college campuses still ban the gadgets.

Turning all that around will be a challenge. Brand consultants point to the incredibly damaging nature of safety issues: Chipotle is still recovering from a 40 percent drop in sales after federal investigators probed the chain's E. coli outbreak last year.

On the other hand, hoverboards' earlier problems were mostly associated with no-name brands, making it possible for more reputable manufacturers to establish a better safety record, says Laura Ries, an Atlanta-based brand consultant.

That's what Segway, now a subsidiary of Beijing-based Ninebot , is counting on. Its solution starts with safety certification by UL (formerly Underwriters Laboratories), a venerable Northbrook, Illinois, firm that tests everything from toasters to outlet extenders. Among other tests, UL submerged the MiniPro in water, dropped it on concrete from a height of three feet and disassembled it to ensure its wiring wouldn't cause a short.

Several other manufacturers, including Razor USA, a private California company known for its kick scooters, have also received UL certification, and plan to relaunch hoverboards in the U.S. market soon.

The next step for Segway: making hoverboards easier to ride. Your typical board is little more than a skateboard turned sideways, with a large wheel on each end. Leaning forward causes you to accelerate; leaning back slows you down or starts a backward roll. (Gyroscopes and electronics keep the board upright.)

Segway's MiniPro adds a steering stick — a vertical padded bar in the middle of the board. Pushing one way or the other with the inside of your legs turns the board. If you're a skier, it's like carving around a mogul. Getting on isn't any more difficult than jumping on a skateboard.

Segway says the stick makes its board more of a "personal transporter" similar to its classic upright, handlebar-equipped Segway. It plans to lobby local governments to reclassify the MiniPro in order to sidestep existing hoverboard bans in some subways, universities and airports, says Brian Bucella, Segway's vice president of marketing and business development.

Hoverboards, however, may still have more hurdles to clear. The federal product-safety commission says it's looking into whether the scooters need to have settings that adjust to the rider's weight before zooming forward, back and turning in order to reduce the number of falls.