The device works even when experiencing small vibrations, which is important if the instrument is deployed in the field. 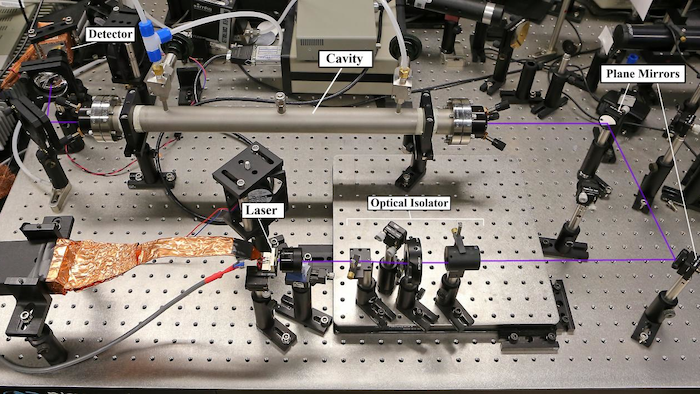 Nitrogen dioxide, a pollutant released by cars and fossil fuel burning power plants, can irritate the lungs, contribute to smog formation, and lead to premature deaths in cities around the world.

A recent study, conducted at Kings College, London, UK, for example, found that more than 5,000 premature deaths in London annually could be attributed to nitrogen dioxide pollution. For this reason, it is important to monitor and control pollution gases.

The device works even when experiencing small vibrations, which is important if the instrument is deployed in the field, where it could be shaken by passing cars, near-by machinery or by thermal changes or air currents.

The researchers describe the new detector in a paper in The Optical Society’s journal Applied Optics.

“Our sensor is much faster and has the potential for much higher sensitivity – if employing better matched optical mirrors – than the previously reported results. It opens the door to interesting, real-time investigation of trace gas concentrations,” said Gottipaty Rao, a physicist at Adelphi University, Garden City, New York, USA.

The detector uses a tried-and-true measurement technique called cavity ring-down spectroscopy (CRDS). With CRDS, a laser shoots a pulse of light into a precisely aligned cavity formed by mirrors. When the pulse ends, the light bounces around in the cavity and slowly leaks out. The time it takes for the light to escape is called the ring-down time.

If the cavity contains a small amount of gas that absorbs the wavelength of the laser, the ring-down time will decrease since some light is lost to the absorption. Measuring the change in ring-down time indicates the concentration of the trace gas. In order for the sensors to work, the laser must be resonant with the cavity, meaning that the wavelength of the light “matches” the cavity length in such a way that the light bounces around for a long time.

Standard CRDS sensors are susceptible to vibration-induced errors, since small shifts in the length of the cavity can dramatically reduce the sensitivity. As a result, special vibration-isolation equipment must be employed to use CRDS in the field.

One proposed fix for the vibration sensitivity involves shifting the alignment of the laser and the cavity so that the laser will be resonant with the cavity in many different ways. If one resonance is eliminated by a length change (due to vibration), other resonances act as back-up. However, this fix reduces the sensitivity of the detector.

Rao and his colleagues tried a different approach.

They used a high-power broadband laser, which contains a wider range of wavelengths than typical for CRDS lasers. Any slight shift of the cavity length due to vibrations simply shifts the cavity resonances to other wavelengths that the laser is already emitting.

The researchers tested the device by measuring trace concentrations of nitrogen dioxide.

“If the wavelength of the laser is changed, the technique could also readily be applied to monitor other gases such as methane (a powerful greenhouse gas), ammonia (an air pollutant) and sulfur dioxide (a pollutant from fossil fuel burning power plants),” Rao explained.

Currently, monitoring of nitrogen dioxide in the atmosphere is done using chemiluminenscence, a chemical reaction that generates light, Rao said. It is not capable of real-time measurements and requires an elaborate calibration procedure to get the absolute concentration of the gas.

CRDS has unique advantages over chemiluminenscence and Rao believes the new detector will make it a more practical tool for the field.

In addition, measuring trace concentrations of specific gases in a person’s exhaled breath may be used to diagnose certain diseases or conditions, thus the device may eventually aid doctors in non-invasive breath analysis. “More importantly, our approach may also prove useful in developing a highly sensitive explosive detector — especially applicable to security and air travel — that targets nitro group (NO2) based explosives such as TNT, GN, RDX, HMX, PETN and TATB,” Rao said.

“Even though the CRDS technique is powerful for trace gas detection, it has found limited use for field based monitoring applications primarily because of its sensitivity to vibrations. We demonstrate a simplified approach that makes the CRDS technique insensitive to vibrations and can be employed for field-based applications by an appropriate choice of a high power multimode laser and the species of interest,” Rao explained.

The team says the device’s sensitivity and response time could be even further improved by using higher reflectivity mirrors and optimizing the design of the cavity. “This would open up new possibilities in atmospheric monitoring, chemical reaction studies and explosive detection,” Rao said.