DoseNet devices consist of a low-cost circuit board and a small radiation sensor developed in the aftermath of the Fukushima disaster. 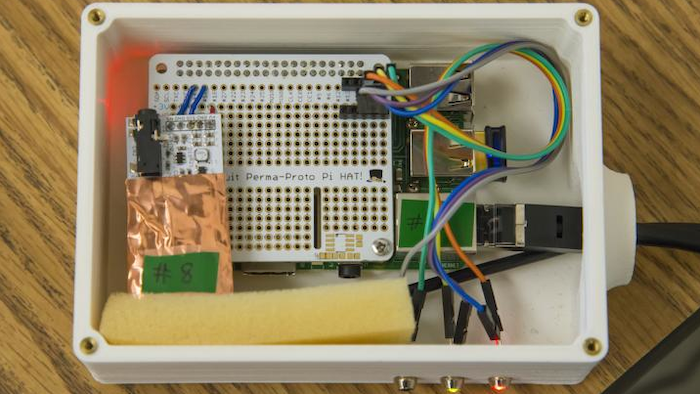 Members of a high school science club gather in the school’s chemistry lab for a lunchtime meeting to learn about local, natural sources of radiation as a nearby wall-mounted sensor box with glowing LED lights collects live radiation data and feeds it to a website.

A network of these radiation-monitoring devices—designed and engineered by UC Berkeley students working with researchers at the Department of Energy’s Lawrence Berkeley National Laboratory (Berkeley Lab)—and a companion website and open-source code serve as educational and outreach tools for an international project called DoseNet that stretches from Northern California classrooms to a city hall in Japan.

Its broad aim is to inform and connect students and communities around the world using science and data as common ground.

From Sensor Network to Social Network

“The main objective of DoseNet is to engage students in engineering and science,” said Kai Vetter, a Berkeley Lab scientist and UC Berkeley professor and lead scientist for its parent program, Berkeley RadWatch. “Radiation is part of the world around us, and we are using it as a tool to work with students and teach them about science, engineering, and programming.”

Berkeley RadWatch is set up to address fears that radiation from the 2011 tsunami-triggered Fukushima Daiichi nuclear power plant accident could find its way to the U.S. West Coast.

The RadWatch team has monitored air, fish, seaweed and other types of samples for several years, with results posted online to provide independent and transparent information to the public.

Koriyama is the network’s first international site and is about 45 miles from the Fukushima nuclear plant, outside of the region’s evacuation zone. DoseNet’s first sensors went online in November 2015.

Vetter said there are plans to expand the network to include more countries, so that the information exchange it promotes truly becomes multinational and multicultural.

“One important component that we really want to capture with DoseNet is going from the sensor network to the social network,” he said. “We want to establish this program as a social network, based on science and engineering, so that kids from around the world can communicate and collaborate on the varying natural background radiation levels in their local communities.”

Locating the DoseNet network in high schools and colleges allows researchers at Berkeley Lab and UC Berkeley to engage directly with students, teachers, and the broader community, Vetter noted, with an aim toward integrating nuclear and data science, design and engineering, and programming concepts into the curriculum, and providing a platform for students to build new skills.

DoseNet devices consist of a low-cost circuit board and a small radiation sensor developed in the aftermath of the Fukushima disaster through a Japanese nonprofit project, housed in a UC Berkeley-designed, 3-D-printed plastic box that measures 5.5-by-3.5 inches.

The silicon-based sensor provides updates in five-minute intervals on natural or “background” sources of radiation—the kind of radiation that is always present in the environment from sources like the sun, outer space, and rocks and soil. The sensor measures little surges of electrical current produced as gamma rays—a highly energetic form of radiation known as ionizing radiation—knock electrons away from silicon atoms in the sensor.

Data reflecting the frequency of the surges are automatically sent to a Web server at Berkeley Lab. The data can be displayed in different units to reflect the different ways to measure radiation and its effects.

DoseNet staff met with the science club at Campolindo High School in Moraga, Calif., about 22 miles east of San Francisco, last month to provide an update about the school’s participation in the DoseNet program.

The DoseNet sensors don’t provide any info about the isotopes associated with the radiation readings, Hanks and Plimley explained to students, so the DoseNet team used a more sophisticated gamma-ray detector, which resembles a TV news camera, to view isotope-specific details for DoseNet sites.

Hanks noted that three of the most abundant natural radiation sources for the San Francisco Bay Area are forms of potassium, uranium and thorium. Hanks then demonstrated a live measure of the school’s background radiation using the gamma-ray detector to show that the site measures lower in potassium than other DoseNet locations.

“Our first goal is getting people to understand that there is natural background radiation that varies geographically,” Hanks said, “and another goal is to encourage schools to start incorporating concepts of radiation into their curriculum.”

Rachel Eaton, a Campolindo chemistry teacher and adviser to its Science Club, signed on for the school to become a DoseNet site last year after attending an annual workshop hosted by the Department of Nuclear Engineering at UC Berkeley.

Background radiation is a concept that may be unfamiliar to many students and the public at large, Eaton said. “We don’t get to cover much in the way of nuclear science” in the regular curriculum, she said. “That’s one of the reasons that I really like this project.”

Zerkle said, “It’s really cool that [DoseNet] exists,” adding that the outreach effort has taught him that “high-energy radiation is everywhere” in the natural environment. He said he is interested in studying weather data alongside the radiation data to search for correlations.

The DoseNet website offers individual monitoring site data and also consolidated data from all of the sites. DoseNet offers open-source code, and there are also plans to utilize a Web app called Jupyter to foster data science projects using the Python programming language.

“We are using a relatively simple but powerful software platform,” Hanks said. “We want most of this to be at a level where students can work with it.”

There is ongoing work to develop weather-sealed DoseNet cases for outdoor use, and there are plans to couple the DoseNet radiation sensors to other types of real-time environmental monitoring such as weather patterns, air pollution, UV (ultraviolet light) and carbon dioxide levels, to provide richer data for students to work with.

Vetter said, “This will enable students to put associated changes in the levels of background radiation in the context of other environmental exposures. By embedding a social platform within the dosimeter network via the DoseNet website, students will be able to engage in longer-term discussions on these concepts.”

The DoseNet project is continuing to rapidly expand. For more information or to join the DoseNet community, visit https://radwatch.berkeley.edu/dosenet/join.