The fastest women's pursuit team in track cycling just got a whole lot faster. Not by a small margin, either. 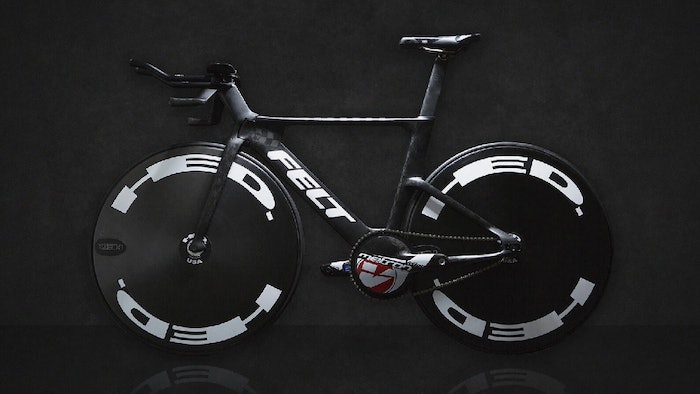 After four years of development, Jim Felt, the founder of Felt Bicycles, unveiled the TA FRD bikes with which the riders would compete in Rio.
Felt Bicycles

USA Cycling and bike maker Felt unveiled a revolutionary bike more than two years in the making Friday, one that should make the record-setting Americans the odds-on favorites for gold at the Rio Olympics.

The bike takes into consideration the specific aerodynamics of a velodrome for the first time, resulting in a number of unique attributes: the entire bike is asymmetrical to account for yaw, the drive-train is moved from the right side to the left, and every tube is shaped to produce maximum speed.

The resulting bike could shave up to 4 seconds off a team pursuit time. To put that into perspective, the U.S. women set the world record of 4 minutes, 16.180 seconds at the world championships in March. Silver medalist Canada and bronze medalist New Zealand were 4 seconds off their pace.

In essence, the new bike has doubled the ground that rival nations must make up.

"There are some very good teams out there, but I think at the Olympics, everyone is going to bring their A-game," said Jim Felt, who founded the California-based bike company and has long supported USA Cycling.

The British team, which won the women's team pursuit at the 2012 Olympics, dominated track cycling events in part because of what they called marginal gains — tiny advantages ranging from the fabric of their skinsuits to the leg-warmers that riders wore between races to gain modest advantages.

The new bike produced by the Americans is no marginal gain. It's a massive one.

"Our goal after London was to assemble the best team in the world and to put that team on the best bike in the world," said USA Cycling vice president Jim Miller. "Working with all of our partners, we feel that we have created a game-changer that will help deliver us to the top step in Rio."

The five members of the team — Kelly Catlin, Chloe Dygert, Sarah Hammer, Jennifer Valente and Ruth Winder — have been testing the bike for a couple of months, but always under lock-and-key. One of the biggest challenges was to keep the project under wraps until rival nations could not reproduce it.

With less than three months to Rio, Miller is confident the threat has passed.

"Just the engineering took in the neighborhood of six, seven months," he said. "To be honest, I'm surprised it hasn't gotten out. The girls have been riding in camps the last two months. We lock it down and minimize as much chatter or pictures or anything like that but I'm a little surprise it hasn't leaked."

The project began in late 2012, after Miller told Felt his goal of winning gold in Rio.

Felt put two engineers on the task full-time, and they began studying the aerodynamics of a track bike in new ways. It had always been assumed that wind-resistance was met head-on in the static environment of an indoor track, but the engineers found that it actually hit riders at an angle.

They took all their data and began to model the bike, then had the radical idea of moving the drive-train to the left side. They even used a 3D printer to create a plastic model for wind-tunnel testing.

The unique design meant that everything else had to be designed from scratch, too — the hubs, the cogs, every nut and bolt that holds it together. HED Cycling Products designed custom wheels, Vision created a new crankshaft, Vittoria produced tires and Stages Cycling designed new power meters.

It's turned out to be the centerpiece of an entire high-performance program.

Beyond the bike, IBM has developed new solutions for collecting and analyzing training data, Solos has created a heads-up display to help with training, and several other companies have provided engineering and other support for the Americans' pursuit of Olympic gold.

"We have a huge amount of pride in helping the women in this program," Felt said. "I always say I was put on this Earth to help others achieve their goals, not achieve my own. If we sold a hundred of these bikes we'd be blown away, but that's not why we built this bike."