From Edible Worms to Pingpong Bots: Shenzhen a Startup Mecca

"We've got a saying here that a week in Shenzhen is like a month anywhere else. Teams come here for three and half months and basically get a year's worth of R&D." 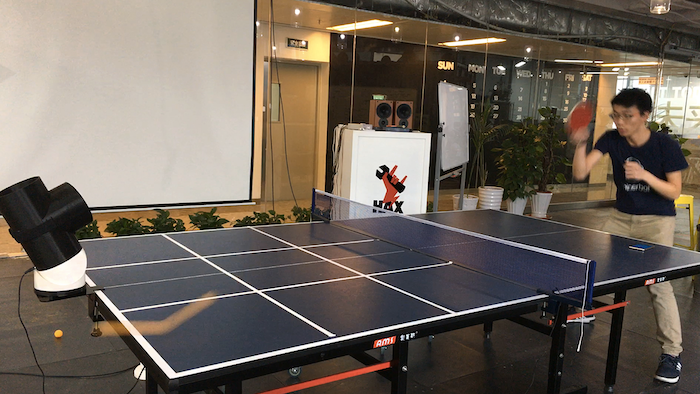 SHENZHEN, China (AP) — Shenzhen is the world's electronics manufacturing capital, so what better place to be for entrepreneurs with ideas they want to turn into actual devices? That's what the founders of Hax thought when they set up their "accelerator" for hardware startups five years ago in the southern Chinese city.

Backed by venture capital, Hax brings groups of startups to Shenzhen and introduces them to the countless component suppliers and factories in and around the city to speed up prototype development. "We've got a saying here that a week in Shenzhen is like a month anywhere else," said Hax partner Duncan Turner. "Teams come here for three and half months and basically get a year's worth of R&D done, which really sets them ahead."

Hax's latest class unveiled their prototypes this week to investors in Silicon Valley and online through Kickstarter campaigns to seek funding for manufacturing. Here are some current and recent examples:

Pingpong enthusiasts Harrison and Alexander Chen's table-tennis-training machine, Trainerbot, is about the size of a large pineapple and can be programmed via smartphone to fire balls at specific areas and give them certain spins. The brothers, raised in Taiwan, managed to build two prototypes a week in Shenzhen, thanks to the city's vast electronics markets and 3D printing services.

Kniterate CEO Gerard Rubio's automated knitting machine can make accessories like scarves, socks or beanies. "This is basically a 3D printer for clothes," he says. Users download a template onto a tablet device, load an image for a pattern and fit spools of yarn. Rubio, of Spain, says in Shenzhen he and his team were able to "go very fast and spend not much money on development."

Swiss startup Rovenso's remotely operated rover is meant for use in disaster areas inaccessible due to contamination and rough terrain. Roveo weighs 300 kilograms (660 pounds) and is up to two meters long, with four wheels whose innovative linkage system allows it to climb over tall obstacles while carrying heavy loads.

Grow your own insects at home with a desktop hive, and then eat them. Livin Farms' Austrian founder Katharina Unger says mealworms are a healthy, sustainable alternative to modern, industrialized food production, delicious roasted and salted, as a minced meat substitute or ground into flour for bread or tortillas. The company topped its $100,000 crowdfunding goal by half after a Hax session last autumn. Unger says being based in Shenzhen enables the company to ensure its factory subcontractor treats staff well and manufactures sustainably.