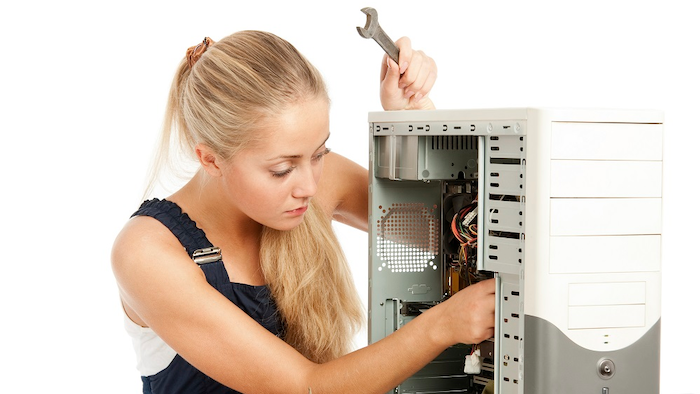 When asked to tackle real-life scenarios such as designing a safe bicycle lane or improving a pet iguana's habitat, 45 percent of girls and 42 percent of boys showed proficiency at understanding and using technology.
iStock

Eighth-grade girls are not only as skilled as boys at thinking through problems and using technology to solve them, they may even be a little better, a study released Tuesday suggests.

The findings come from a first-of-its-kind assessment of technology and engineering literacy by the Nation's Report Card.

When asked to tackle real-life scenarios such as designing a safe bicycle lane or improving a pet iguana's habitat, 45 percent of girls and 42 percent of boys showed proficiency at understanding and using technology, the computer-based assessment found.

"The importance here is to use this information to encourage more young women to recognize that they possess these skills, that they should have confidence with these skills," said Bill Bushaw, executive director of the National Assessment Governing Board that oversees The Nation's Report Card.

And, at a time when women are underrepresented in STEM — Science, Technology, Engineering and Math — jobs, it's important that they know "that they can pursue careers not only in the STEM fields but in other fields that require problem solving and critical thinking," he said.

When asked where they learned about building things or understanding how things worked, nearly two-thirds of the students said family members. About 52 percent reported taking at least one technology or engineering course in school. Whether they learned technology in or out of school, students with some exposure scored better on the assessment, the report said.

"But access to these opportunities from place to place is patchy," said Dr. Tonya Matthews, president and chief executive of the Michigan Science Center, where the report was released. "That's a call for communities to create opportunities where needed, from schools to science centers to after-school programming."

One of the test scenarios challenged students to consider speed limits and lane width to evaluate the safety of a bike route. The iguana task had them learning about iguanas and modifying the cage of a class pet named "Iggy" to keep the creature from being cold, dehydrated or up all night.

Bushaw said the new, interactive nature of the test allowed students to better demonstrate their skills.