A new study on the connection between earthquakes and volcanoes took its inspiration from old engineering basics. 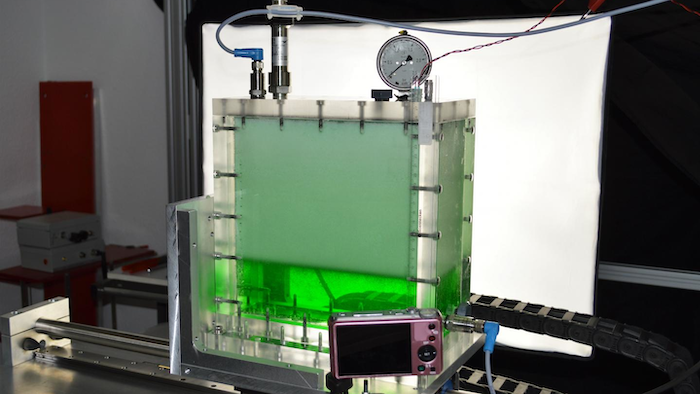 A Hiroshima University researcher traveled to the GFZ German Research Centre for Geosciences to collaborate on a project examining the connection between earthquakes and volcanic eruptions. A sealed box of a syrupy liquid (dyed green) with a tall layer of foamy bubbles on top is connected to sensors and recording equipment.
Atsuko Namiki, Hiroshima University

Future applications of results from a new study may enable better predictions of the likelihood of a volcanic eruption for communities affected by an earthquake.

If you swirl wine in a glass too strongly, the wine crashes against the sides and spills over the top. The same swirling and crashing, technically termed "sloshing," happens when transporting liquids on trucks or ships. Large liquid containers must be specially designed to avoid damage as the vehicle shakes and the liquid sloshes. Strong earthquakes can even damage large petroleum tanks.

When earthquakes shake the ground, the hot, molten rock beneath the Earth's surface can slosh and cause the magma to erupt from volcanoes.

"It might be surprising that ordinary syrup can represent a volcano's magma, but the way syrup moves is quite similar to magma," said Namiki.

Namiki visited the GFZ German Research Centre for Geosciences to use the specialized equipment available there and collaborate with co-authors of the research paper, Dr. Eleonora Rivalta, Dr. Heiko Woith, and Dr. Thomas R. Walter.

A super-fast camera and advanced mathematical calculations were used to analyze video recordings of the model volcanoes.

Air bubbles and small plastic flakes added to the syrup represented the bubbles of gas and solid crystals floating in magma.

During "earthquakes" of certain strength and speed, sloshing popped bubbles inside the syrup. In an actual volcano, popped bubbles release volcanic gas into the atmosphere. This decrease in pressure within the volcano can then trigger an eruption.

"In sealed containers, sloshing only occurs when there is empty air space where the liquid has room to move. Most magma reservoirs in volcanoes are full and sealed, but sloshing still can occur if there are layers of magma of different densities, similar to oil floating on water," said Namiki.

Sloshing mixes the layers, which can trigger the growth of new bubbles that eventually pop and create more violent eruptions.

The research team analyzed the syrup's motion and created a model to describe the conditions under which bubbles in real magma could pop and potentially cause actual volcanic eruptions.

Buildings suffer greater damage when the building's resonant frequency matches the rate of shaking by the earthquake. Similarly, volcanoes have resonant frequencies and certain earthquakes will more significantly slosh magma inside a volcano.

The shape of the inside of the volcano and the location, size, and number of bubbles all influence how a volcano might behave after an earthquake. Depending on the volcano, some earthquakes could trigger volcanic eruptions within weeks, others might take years.

The results indicate that the historically documented increase in the number of volcanic eruptions after an earthquake has an explanation and is not just coincidence.