This year, the company launched a new flagship smartphone, the P9, and is positioning it to compete with Apple and Samsung. 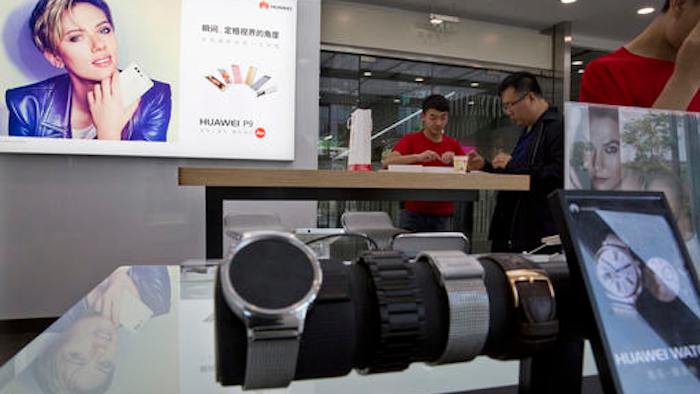 In this Friday, May 13, 2016 photo, a sales person attends to a customer at a Huawei retails shop with an advertisement for the P9 featuring Scarlett Johansson in Beijing, China. This year, its 6-year-old consumer brand launched a new flagship, the P9, and is positioning it to compete with Apple and Samsung.
AP Photo/Ng Han Guan

Huawei Technologies Ltd., which pulled out of the U.S. market for network switching gear four years ago due to security fears, became the No. 3 global smartphone seller last year and passed Apple in China. This year, it launched a new flagship smartphone, the P9, and is positioning it to compete with Apple and Samsung.

"China has yet to create a high-end consumer brand. We want to take that goal onto our shoulders," Eric Xu, one of Huawei's three rotating co-CEOs, told industry analysts at a meeting in April.

To do that, Huawei must succeed in the United States the second- largest market for handsets after China, accounting for one-sixth of global sales, according to industry analysts. There, it starts with almost no market share and a name that consumers, if they know it at all, might associate with anxiety about possible Chinese spying rather than technology and style.

"It is more difficult than any other market they have ever entered," said Nicole Peng of research firm Canalys. "I don't think they have concrete plans yet."

Outside the United States, the company is cranking up a global marketing campaign for the P9 featuring Hollywood stars Henry Cavill and Scarlett Johansson. For markets from Bangladesh to Mexico, it has recruited pop singers and football teams. It partnered with German photography powerhouse Leica to develop the camera on the P9.

The company has yet to say when it might sell the Android-based P9 to Americans or exactly how it will rebuild its U.S. presence.

"We're definitely very patient with the U.S. market," said Joy Tan, Huawei's president for communications, when asked how it planned to connect with buyers. "We hope these phones will be accepted by American consumers."

To meet its ambitious sales growth target of 30 percent a year, Huawei must increase its U.S. market share to double digits from below 2 percent now, said Peng of Canalys.

Huawei, pronounced "HWAH'-way," has big resources to back up its aspirations.

The company headquartered on a leafy campus in this southern Chinese tech hub adjacent to Hong Kong beat Apple and Samsung to market with a camera equipped with side-by-side lenses, one in black and white and one in color, that it says produces clearer images. The handset is slimmer than the iPhone 6s or Samsung's Galaxy 7 but its screen is bigger than the Apple's.

Huawei's phones now are sold in the U.S. only through its website. But it has a potential opening with phone carriers that are the main sales channel and want more products, according to Gartner analyst Tuong H. Nguyen.

Its "deep understanding" of mobile technology "could be leveraged for quick product launches of good quality products," Nguyen said in an email.

That depends on overcoming any lingering security fears.

The U.S. market for Huawei's network gear evaporated in 2012 after a congressional panel deemed Huawei and Chinese rival ZTE Corp. potential security threats and recommended Americans avoid doing business with them. The previous year, a government panel forced Huawei to rescind its purchase of a small California computer company.

"This makes it difficult for Huawei and other Chinese vendors to penetrate this market," said Nguyen.

Huawei rejects accusations it might facilitate Chinese spying and says American critics have failed to present evidence to back them up. The company is privately held but has begun releasing financial results in hopes increased transparency will ease Western security concerns.

For its part, ZTE has been making a quiet U.S. comeback in smartphones. Its market share grew to 4 percent last year, according to Canalys. It is competing with lower prices, not going after the brand-conscious premium tier where Huawei will face formidable competition from Apple and Samsung in their biggest market.

Founded in 1987 by a former military engineer, Huawei became the first Chinese supplier to break into the top ranks of a technology industry, where it competes with Nokia Corp. and Sweden's LM Ericsson in network gear and wireless base stations. Employees joked that, operating behind the scenes for its first two decades, it was the biggest company no one ever heard of.

Huawei's priority this year is a marketing campaign to "address the No. 1 issue that many people don't know the company — especially in Western countries," said Glory Cheung, president of marketing for its Consumer Business Group.

Huawei is cultivating a luxurious image for its smartphones that contrasts with Apple's minimalism. It partnered with luxury brand Swarovski to design a women's smartwatch.

"Not defined the Apple way," said a slide Cheung showed during the April analyst event. It called that style "smart and clean but lifeless, soulless and cut off."

For two decades, Nokia dominated that market, before fading with the switch to smartphones. Nokia sold its mobile phone unit to Microsoft Corp. in 2014 to focus on network gear.

Nokia's disappearance shows the market "can change massively" if a leader makes a mistake, though overtaking Apple or Samsung would be a "highly aggressive target," Peng said.

"It's relatively easy for them to stay at No. 3," she said. "But how to move up to another level? It's so much more difficult."