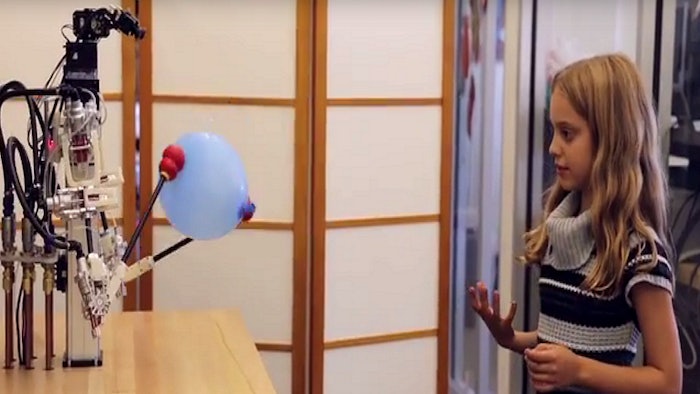 A new type of hydrostatic transmission that combines hydraulic and pneumatic lines can safely and precisely drive robot arms, giving them the delicacy necessary to pick up an egg without breaking it. This transmission has almost no friction or play, offering extreme precision for tasks such as threading a sewing needle.

The hybrid transmission makes it possible to halve the number of bulky hydraulic lines that a fully hydraulic system would require. Robotic limbs can thus be made lighter and smaller, said John P. Whitney, an assistant professor of mechanical and industrial engineering at Northeastern University, who led the development of the transmission while an associate research scientist at Disney Research.

Whitney and colleagues from Disney Research, the Catholic University of America and Carnegie Mellon University, will report on the new transmission and the upper body humanoid robot they built with it at the IEEE Conference on Robotics and Automation, ICRA 2016 in Stockholm, Sweden.

"The transmission provides our robot with incredibly smooth and fast motion, while also allowing life-like interaction with people and the handling of delicate objects," said co-author Jessica Hodgins, vice president at Disney Research and a professor of robotics at Carnegie Mellon. "For now, the robot is remotely controlled by a human operator, but we would expect the same level of mechanical performance once the motions are automated."

Whitney said a robot joint normally would have two hydraulic cylinders, balanced against each other. But in this latest design, the researchers paired each water-filled cylinder with an air-filled cylinder instead. The pneumatic cylinder serves as a constant force air-spring, providing the necessary preload force, allowing the joint to move in both directions with only half the number of bulky hydraulic lines.

The researchers used the new transmission to build a simple humanoid robot with two arms, with stereo cameras mounted in the head, streaming their video signal to an operator wearing a head-mounted display. The arms are coupled to an identical control figure, hidden behind a wall to enable the robot to be used for human-robot interaction research.

"This technology enabled us to build robot arms that are light, fast, and dexterous," Whitney said. "They have an incredible life-like nature, offering a combination of small mass, high speed, and precise motion not seen before."

Robots using this technology are ideally suited for naturally compliant and life-like interaction with people. When tele-operated, the low friction and lack of play allow the transmission to faithfully transmit contact forces to the operator, providing a high-fidelity remote sense of touch.

In addition to Whitney and Hodgins, the research team included John Mars of Disney Research, who developed the camera and head-mounted display system, and Tianyao Chen, a research assistant at The Catholic University of America, who designed the robot arms while an intern at Disney Research.

For more information and to see a video of the robot, visit the project web site at http://www.disneyresearch.com/publication/haptic-telepresence-robot/.