A flexible exosuit developed by Harvard researchers reduces the strain on lower extremities when walking with a heavy load. 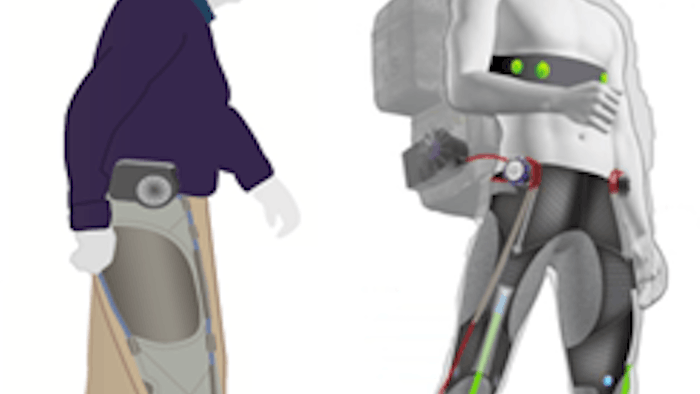 A flexible exosuit, developed by researchers at Harvard University, reduces the energy cost of walking when carrying heavy load, according to a proof-of-principle study published in the open access Journal of NeuroEngineering and Rehabilitation.

The researchers found that the exosuit reduced the amount of energy consumed during loaded walking - the metabolic cost - by 7.3 percent on average. The suit also significantly reduced the work done by the hip, knee and ankle joints, without impacting step frequency or length. Hip, knee and ankle movements of walkers carrying a load while supported by the suit were similar to movements measured during unloaded walking. This suggests that the suit does not affect the wearers' freedom of movement, but allows them to return to a walking profile closer to that of people walking without a load.

The Harvard researchers used textiles to build their alternative to rigid exoskeletons, which are heavier and can interfere with the natural movement of the joints, causing the wearer to change the way they walk. The suit is composed of a waist belt, two thigh pieces and two calf straps, connected by cables to two motors mounted on a backpack.

The energy from the motors travels via the cables to the suit which transfers it to the wearer. The suit becomes active only when it detects a walking motion. It assists the hip and ankle joints which together contribute about 80 percent of the power produced by the leg joints during walking.

Conor Walsh, the corresponding author, said: "Our results demonstrate for the first time that an autonomous soft exosuit can reduce the energy expenditure experienced by load carriers, possibly enhancing their overall gait performance. Apart from assisting load carriers, we are exploring how the soft exosuit can be used to assist individuals with impaired movement, paving the way for the use of this technology in a wide range of people."

According to the researchers, it is important that a device which aids loaded walking pays for its own weight, which means that even though the wearer carries the additional load of the exosuit, the overall metabolic cost of walking is reduced. To find out whether this was the case, the researchers tested their exosuit under three conditions.

Seven experienced load carriers who had no injuries or diseases of their muscles, joints or bones, walked on a treadmill at a constant speed of 1.5 meters per second while carrying a load equal to 30 percent of their body mass. Researchers monitored the participants' metabolism, kinetics (forces that influence the movements of the body) and kinematics (e.g. flexion, extension or rotation of joints and muscles). The researchers also analyzed the participants' breathing, gait and muscle activation.

Previous research into the movements of load carriers found that the muscles in their lower legs need to work harder during loaded walking to sustain the load and balance the joints. The resulting higher muscle activity is associated with an increased metabolic cost. This can cause fatigue, reduced maneuverability and an overall reduction of performance. Acute medical problems and an increased risk of injury are also associated with loaded walking.

The device could benefit groups of people who frequently carry heavy loads, such as soldiers, first responders or hikers, according to the researchers. It could also prove useful for people with physical impairments.

Even though the sum of the work done by the hip, knee and ankle joints was shown to be reduced significantly in this study, only small differences were measured in muscle activation. Further work is needed to understand the underlying specific muscle mechanisms, and to find out if the assistance provided by the suit is most effective if focused on a single joint or if shared across multiple joints, the researchers suggest.