The next step in wireless charging, which entails re-powering the battery without removing the device from your pocket, could be right around the corner. 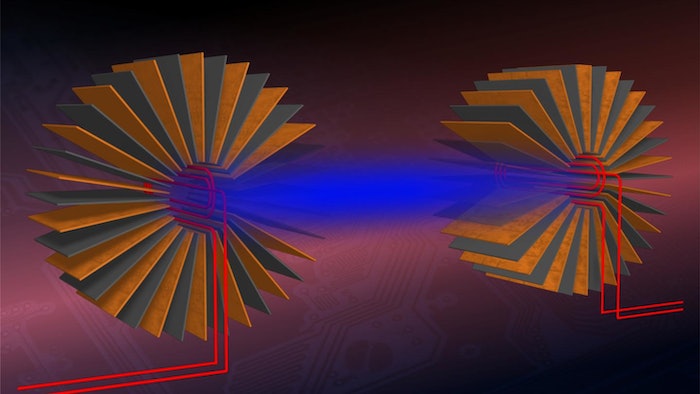 This schematic diagram shows the experimental setup used to transfer energy between two circuits, developed by UAB researchers.
Jordi Prat
Wireless charging of mobile devices is possibly one of the most desired technological milestones. Some devices can already be charged wirelessly by placing the mobile device on top of a charging base. The next step, charging devices without the need of taking them out of one's pocket, might be just around the corner.

A group of researchers from the Department of Physics of Universitat Autònoma de Barcelona has developed a system which can efficiently transfer electrical energy between two separated circuits thanks to the use of metamaterials. This system is still in the experimental stage, but once it has been perfected and can be applied to mobile devices, it will be able to charge them wirelessly and at a longer distance than currently possible.

Today's wireless devices make use of induction to charge through a special case adapted to the device and a charging base connected to an electrical socket. When the device is placed on top of the base, this generates a magnetic field which induces an electric current inside the case and, without the need of using any cables, the device is charged. If the device is separated from the base, the energy is not transferred efficiently enough and the battery cannot be charged.

The system created by UAB researchers overcomes these limitations. It is made up of metamaterials which combine layers of ferromagnetic materials, such as iron compounds, and conductor materials such as copper. The metamaterials envelop the emitter and receiver and enable transferring energy between the two, at a distance and with unprecedented efficiency.

With the use of metamaterial crowns researchers were able in the lab to increase the transmission efficiency 35-fold, "and there is much more room for improvement, since theoretically the efficiency can be increased even more if conditions and the design of the experiment are perfected" explains Àlvar Sánchez, director of the research.

"Enveloping the two circuits with metamaterial shells has the same effect as bringing them close together; it's as if the space between them literally disappears", states Jordi Prat, lead author of the paper.

Moreover, the materials needed to construct these crowns such as copper and ferrite are easily available. The first experiments conducted with the aim of concentrating static magnetic fields required the use of superconductor metamaterials, unfeasible for everyday uses with mobile devices. "In contrast, low frequency electromagnetic waves - the ones used to transfer energy from one circuit to the other - only need conventional conductors and ferromagnets", Carles Navau explains.

Published this week in Advanced Materials, the study was conducted by researchers from the Electromagnetism Group of the UAB Department of Physics Àlvar Sánchez (also an ICREA Acadèmia researcher) and Carles Navau, and by Jordi Prat, currently researcher at the Institute for Quantum Optics and Quantum Information of the Austrian Academy of Sciences in Innsbruck.

The device has been patented by the UAB and companies from several different countries have already shown interest in applying the technology. The research was funded by the PRODUCTE project of the Government of Catalonia, the European Regional Development Fund (ERDF) and the Spanish Ministry for Economy and Competitiveness.