Researchers identify a potential culprit for decaying electrodes and electrolytic fluid, because no one else was 'bothering to look for it.' 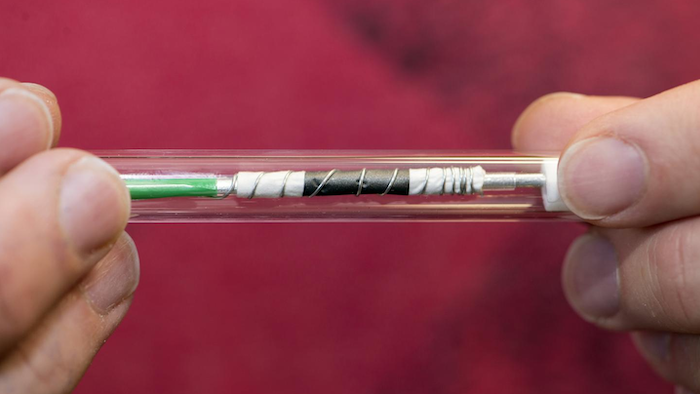 Corresponding author Johannes Wandt with one of the electron paramagnetic resonance probes he developed for the detection of singlet-oxygen which is produced during the charging process.
Andreas Battenberg, TUM

Theoretically they might be much lighter and offer better performance than current lithium ion batteries, however, currently they run out of steam after only a few charging cycles.

Researchers at the Technical University of Munich (TUM) and the Forschungszentrum Jülich have now investigated the processes and discovered a possible culprit, highly reactive singlet oxygen, which is released when the batteries are charged.

A trimming diet is in order. Cell phones still bulge from jacket pockets and laptop computers continue to overstrain shoulder muscles. To blame are primarily the batteries, the ubiquitous lithium ion batteries need heavy electrodes made of transition metal oxides.

Light-weight alternatives are thus sought after.

"One of the most promising approaches is the lithium air battery in which the lithium cobalt oxide cathode is replaced by carbon particles," explains Johannes Wandt, doctoral candidate and member of Prof. Hubert Gasteiger's team in the Department of Technical Electrochemistry at TUM.

Unfortunately, the technology is not yet ready for everyday use because rechargeable lithium air batteries have only a very short lifetime. After only a few charging cycles the carbon electrode becomes corroded and the electrolytic fluid decomposes.

"The theoretical energy density of these new rechargeable batteries is significantly higher than that of traditional lithium ion batteries," adds Wandt. "The problem was that no one knew exactly why."

The Mystery of the Short Battery Life

In collaboration with his colleagues, Wandt has now solved the mystery. The Munich scientists, together with experts from the Forschungszentrum Jülich, identified a potential culprit for the decaying electrodes and electrolytic fluid in an experiment: Singlet oxygen, an extremely reactive substance, is created when lithium air batteries are charged. Within fractions of a second it corrodes the surrounding material it comes into contact with.

The suspicion that singlet oxygen damages batteries is not altogether new, but only now have the researchers detected the highly reactive substance. What took so long?

"Simply put, no one bothered to look for it," suspects TUM researcher Johannes Wandt. Because of a miscalculation the research community mistakenly assumed that the underlying reaction only occurs at high voltages. A rather complex experimental setup further compounded the situation.

In order to investigate the charging process more precisely, the TUM researchers built a special lithium air battery. The power sinks are thin and arranged in a helix form inside a transparent glass housing. This ensures that microwave radiation and magnetic fields essential for the measurements are not shielded.

"In addition, we added molecules to the electrolytic fluid that capture the short-lived singlet oxygen and bond it as a stable radical," reports Wandt. "Using a special measuring instrument in Jülich for electron paramagnetic resonance spectroscopy, or EPR, we were able to substantiate the formation of singlet oxygen during the charging process.

"The problem has thus been identified - but not averted. Now, the researchers hope to find a mechanism to prevent the formation of singlet oxygen during charging. "Basic research could provide the foundation for the development of novel, long-lasting lithium air batteries," says Wandt.