The company has blamed the delays on an "unexpected component shortage," but many find the excuses unacceptable. 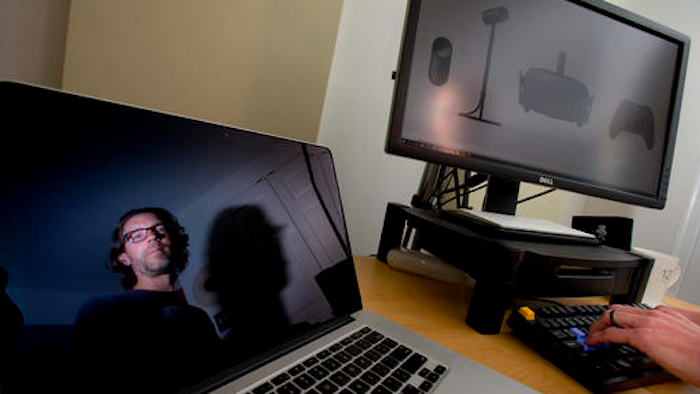 In this Friday, April 22, 2016, photo, Christian Cantrell, a software engineer and science fiction author, poses for a photo at his high-end computer setup that an Oculus Rift camera will go with, at his home in Sterling, Va. Cantrell pre-ordered the device and is still waiting, despite the fact that the gadgets began shipping weeks earlier.
AP Photo/Pablo Martinez Monsivais

LOS ANGELES (AP) — Virtual reality, oddly enough, isn't immune to the problems that arise in practical reality. Just ask would-be fans of the Oculus Rift headset, many — possibly most — of whom are still waiting for their $600 gadgets more than four weeks after they started shipping .

The delay, naturally, has sparked online grousing and even some data-based activism, including the creation of a crowdsourced spreadsheet for tracking who received their prized VR gear and when. Some longtime supporters of Oculus have declared themselves alienated by the company's inability to deliver; others have defected to rival VR systems, or are at least considering it.

Christian Cantrell, a software engineer and science-fiction author in Sterling, Virginia, put in his pre-order roughly 15 minutes after Oculus started accepting them in January — and is still waiting. It's been a "bummer," he says, because he passed up buying a rival headset, the HTC Vive, hoping to be part of a VR "renaissance" with Rift.

"I've been kind of like an Oculus believer," he says. "But if they bump it again, I might just order a Vive."

It's too soon to say how the delays will affect Oculus, much less the overall acceptance of VR, a technology that submerges users in realistic artificial worlds. (Early VR "experiences" consist primarily of video games .) In other contexts, big companies like Apple have managed to weather shortages and shipping delays for products such as the Apple Watch and its new iPhone SE.

But some find the Rift delays intolerable, especially given that Oculus is no fledgling startup, but part of Facebook — the social network bought it two years ago for $2 billion. "There's an element of inexcusable incompetence going on," says J.P. Gownder, a Forrester Research analyst, who placed his preorder in the first 10 minutes but doesn't expect his Rift until mid-May.

Experienced hardware manufacturers would have set up suppliers months or years in advance to avoid these types of problems, Gownder says. The fact that Oculus managed to bungle its launch with more than three years to prepare, plus the backing of Facebook, is "scandalous," he says.

Oculus, which has blamed the delays on an "unexpected component shortage," declined to comment on specifics. It told the AP in a statement it has moved to address the shortage and expects deliveries to accelerate in coming weeks. By way of apology, Oculus said it will offer free shipping to customers who ordered before April 1.

Few have been as disappointed as some of the company's earliest supporters. Back in January, Oculus founder Palmer Luckey announced that 5,600 of the company's first Kickstarter backers would be eligible for a free headset. He then tweeted on the eve of first deliveries that the gifts would "start arriving" two days before others, giving the impression Kickstarter backers would get theirs first.

It didn't happen. Unhappy customers gathered on Reddit to complain and to figure out where they stood in line; one poster catalogued the frustration on a crowdsourced spreadsheet. While not necessarily representative of the entire Oculus customer base, that data shows that of the 131 early Kickstarter backers who submitted responses, only 28 report receiving a unit. Of 1,399 pre-order customers, just 165 say they got a Rift.

The virtual reality boom is just getting going, and the competition is growing. Sony will release its PlayStation VR headset later this year. Google is expected to expand on its primitive Cardboard viewer, and recent Apple acquisitions suggest that it may also be jumping into the field soon.

Meanwhile, the Rift is losing some of its first-mover appeal. Some games originally designed to be Oculus exclusives have now been hacked to work on the HTC Vive, which launched about a week after the Rift, but hasn't experienced shipping delays. Customers who bought Rift games before receiving their headset can now get digital keys so they can play the games in real reality, on a regular PC.