This era was grimly summarized in a report which suggested that, with the coming of the "Bomb," it was possible to depopulate the earth, leaving only "vestigial remnants of man's works." 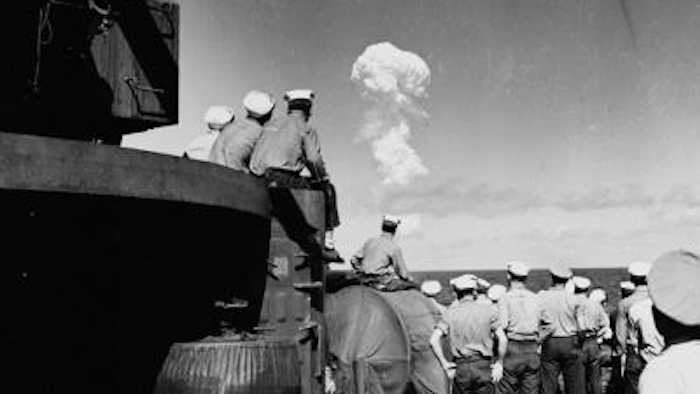 Sailors watched the Able Test burst miles out to sea from the deck of the support ship USS Fall River on July 1, 1946.
Naval History and Heritage Command

The April issue of Springer's Journal of Maritime Archaeology (JMA) focuses on a single shipwreck as the lens through which maritime archaeology assesses the advent of the Atomic Age and the Cold War.

The wreck is the World War II veteran aircraft carrier USS Independence, which was one of nearly a hundred ships used as targets in the first tests of the atomic bomb at Bikini Atoll in the summer of 1946.

In addition to three original papers and two commentaries, the issue also includes the now declassified files on USS Independence's post-Bikini history from the National Archives, published for the first time. The files are freely available online to the general public until 15 June 2016.

The Bikini tests, in the immediate aftermath of the atomic end to World War II in Japan, signaled a new era in world history. This era was grimly summarized in a then-classified report on the Bikini tests which suggested that, with the coming of the "Bomb," it was possible to depopulate the earth, leaving only "vestigial remnants of man's works."

While that fate has yet to (and hopefully will never will) come, what is presented in this issue is one of the remnants of the dawn of the nuclear age.

The wreck of the USS Independence lies nearly 30 miles off the central California coast. This is where the US Navy scuttled it to take it beyond the reach of potential Soviet espionage at the end of its usefulness as a nuclear test platform in 1951.

The US National Oceanic & Atmospheric Administration's (NOAA) Office of Ocean Exploration and Research and the Office of National Marine Sanctuaries worked with the Boeing Company in 2015 to pinpoint the wreck.

The goal was to learn more about it in a deep water test that merged high-resolution sonar and a free swimming underwater robotic vehicle, "Echo Ranger."

"The Journal of Maritime Archaeology is honored to be able to present the case study of the USS Independence," says JMA's co-editor-in-chief, Annalies Corbin. "NOAA's achievements in contextualizing the work ahead for maritime archaeologists around the world as it relates to post-World War II and Cold War archaeology is critical to launching meaningful conversation and developing initial plans for underwater cultural heritage management of vessels like the USS Independence."

"Historical and, by extension, maritime archaeology of the recent past can and should include merging documentary evidence with physical remains," notes NOAA's James Delgado, Director of Maritime Heritage for NOAA's Office of National Marine Sanctuaries and lead scientist for the Independence mission. For this issue in the Journal of Maritime Archaeology, Delgado co-authored the report "Initial Archaeological Survey of the ex-USS Independence (CVL-22)" and also prepared a bibliographic essay on the subject and an article summarizing the fates of the Bikini target not sunk at Bikini.