An advanced system could increase fuel efficiency by 10 times over current chemical propulsion tech and more than double thrust capabilities. 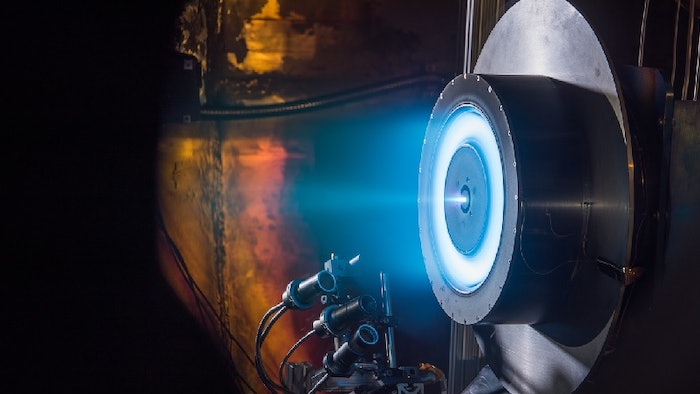 A prototype 13-kilowatt Hall thruster is tested at NASA's Glenn Research Center in Cleveland. This prototype demonstrated the technology readiness needed for industry to continue the development of high-power solar electric propulsion into a flight-qualified system.

On Tuesday, April 19, 2016, NASA awarded a contract to Aerojet Rocketdyne, Inc. to design and develop an advanced electric propulsion system that will significantly advance the nation's commercial space capabilities, and enable deep space exploration missions, including the robotic portion of NASA’s Asteroid Redirect Mission (ARM) and its journey to Mars.

NASA has been refining development of spaceflight electric propulsion technology for more than five decades.

The first successful ion electric propulsion thruster was developed at Glenn Research Center in the 1950s.

The first operational test of an electric propulsion system in space was Glenn’s Space Electric Rocket Test 1, which flew on July 20, 1964.

Since then, NASA has increasingly relied on solar electric propulsion for long-duration, deep-space robotic science and exploration missions.

The next step will be to demonstrate this new electric propulsion system in space. Development of this technology will advance future in-space transportation capability for a variety of deep space human and robotic exploration missions, such as the NASA’s Asteroid Redirect Mission (ARM), as well as private commercial space missions.