A special cargo plane of sorts, the aircraft is designed to carry the company's rocket ship to high altitudes where it will detach and take paying tourists the rest of the way to the edge of space. 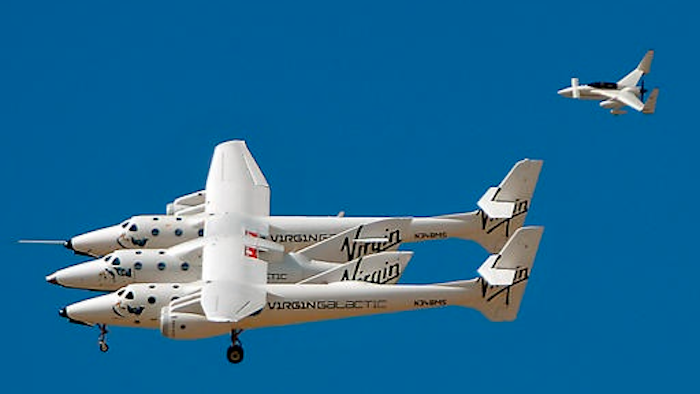 A chase plane flies on the tail of the WhiteKnightTwo and SpaceshipTwo as it soars above the runway of Spaceport America in Upham, NM, during the 2010 runway dedication ceremony. A team of pilots, ground crew and mission control specialists are at the spaceport for a week of air and ground testing in preparation for future commercial space flights at the remote patch of desert in Sierra County.
Norm Dettlaff/The Las Cruces Sun-News via AP

ALBUQUERQUE, N.M. (AP) — It was nothing but clear, blue skies as the sleek, jet-powered plane approached the runway at Spaceport America in southern New Mexico, only to briefly touch down and then thrust off again.

Over and over again, Virgin Galactic's WhiteKnightTwo was put through the paces as the pilots, ground crew and mission control specialists checked off some of the numerous ground and air exercises scheduled this week as the team prepares for future commercial space flights.

A special cargo plane of sorts, the aircraft is designed to carry the company's rocket ship — called SpaceShipTwo — to high altitudes where it will detach and take paying tourists the rest of the way to the edge of space.

While Virgin Galactic chief executive George Whitesides wasn't willing to put a firm date on when flights might begin, he said the company is on track with its internal schedule and is making progress with testing of its new spaceship in California.

"I think getting the vehicle in test flight is a key milestone and this time around we're doing all that internally with our own staff so we hope we'll be able to make rapid progress," he said while standing on the tarmac as WhiteKnightTwo landed after an hour of touch-and-go's.

After years of development, Virgin Galactic appeared to be nearing the goal of turning ordinary civilians into astronauts when the first SpaceShipTwo broke apart on Oct. 31, 2014, during its fourth rocket-powered flight over the Mojave Desert, killing the pilot.

Its new spaceship finished up a round of electronic and aviation testing just last week, and Whitesides said he hopes test flights for that craft will begin soon.

Back in New Mexico, the hanger at Spaceport America is full this week with a model of the spaceship, the massive carrier plane and other aircraft that are aiding in the exercises.

"It really feels like an active hangar, which is what we've all been waiting for," Whitesides said. "It feels really good to have all of these real aircraft in the building and being used."

A team of about 20 people joined the group already stationed at the spaceport, situated in a remote stretch of desert less than an hour east of Truth or Consequences, New Mexico.

The plan calls for a full mission simulation for WhiteKnightTwo on Thursday. The team is going over every detail, including the best locations for tie-downs and other connections used when the plane is being prepped for missions.

"This is a very important step along the journey to the first flight of the Virgin Galactic commercial spaceline," said Christine Anderson, head of the New Mexico Spaceport Authority. "You cannot over train or over exercise. Nothing is taken for granted."

The crew at spaceport has been helping to coordinate the use of airspace from their mission control center not far from the futuristic hangar occupied by Virgin Galactic.