Improvements to the LM-100J stem from years of C-130J operational experience, including more than 1.3 million flight hours by operators in 16 nations. 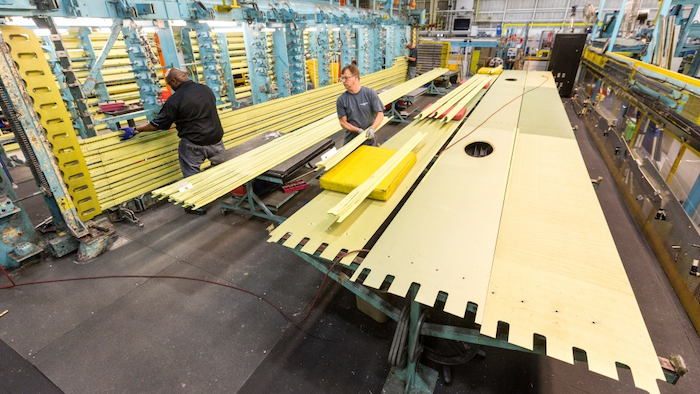 Production Operations team members work on a wing that is part of the first LM-100J commercial freighter at the Lockheed Martin site in Marietta, Georgia. The LM-100J is the commercial variant of the proven C-130J Super Hercules.
Todd R. McQueen

Wing production has begun in Marietta, which is home to the C-130J Super Hercules final assembly line, while other structural parts are in production at the Meridian and Clarksburg facilities.

The LM-100J is the civil-certified version of Lockheed Martin’s  C-130J Super Hercules and an updated version of the L-100 (or L-382) cargo aircraft.

“Watching the LM-100J move from concept to reality is monumental for everyone involved, including our team members, industry and our customers,” said George Shultz, vice president and general manager, Air Mobility & Maritime Missions at Lockheed Martin.

Lockheed Martin officials submitted a Program Notification Letter to the U.S. Federal Aviation Administration (FAA) on Jan. 21, 2014, for a type design update for the Lockheed Martin Model L-382J airplane, a civil-certified variant of the C-130J Super Hercules to be marketed as the LM-100J.

The LM-100J is expected to make its first flight in 2017, then enter into an FAA certification phase.

Through select design innovations, the LM-100J will perform as a commercial multi-purpose air freighter capable of rapid and efficient cargo transport.

The LM-100J is an ideal airlift solution for delivering bulk and oversize cargo, particularly to austere locations worldwide. Like its military counterpart, the LM-100J will be able to support multiple missions, ranging from fire fighting to medevac to VIP transport.

The LM-100J incorporates technological developments and improvements over the existing L-100s that result from years of C-130J operational experience, including more than 1.3 million flight hours by operators in 16 nations.