The 3D-printed next-gen motors have a meshwork of finely spaced voids in the material. 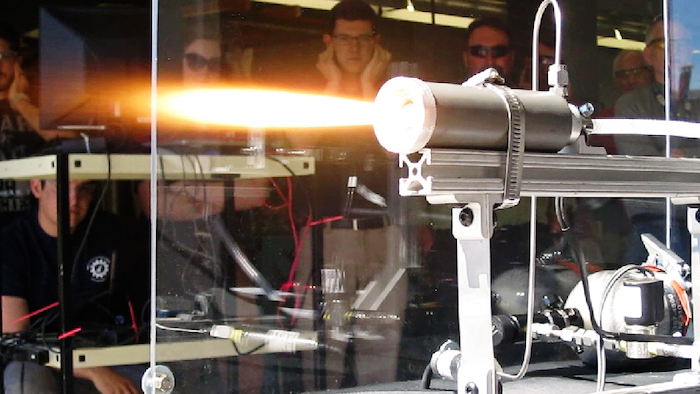 The team of undergraduate students, led by Professor Tony Whitmore, will get a $200,000 NASA grant to better understand how a new generation of “green” rocket motors could help revolutionize the space industry.

The small, next-generation motors developed at USU (check out the video demo) are made of multiple layers of printed ABS plastic. The engineered layering process creates a meshwork of finely spaced voids in the material.

When electrodes are added to the structure and voltage is applied, electrical charges accumulate in the small spaces and allow an electrical arc to build up in the core of the motor.

By simultaneously introducing oxygen, the evaporated fuel material burns and a rocket motor is born. The small motors are highly efficient and have remarkable stop and restart capabilities. Using 3-D printing to achieve the proper surface structure is an essential feature of the motor design.

Whitmore, who created the technology, says the units are a promising alternative to the motors used on small spacecraft today that use the highly toxic and unstable liquid fuel hydrazine. He says the mini rockets could be used in several applications and are ideal for use as a thruster on small satellites.

With funding from NASA, Whitmore’s team will flight test the motors to determine if their exhaust plumes can contaminate sensors, electronics, solar panels and other external surfaces on the spacecraft.

To test the concept, NASA will provide a sounding rocket that will launch in mid 2018 from the Wallops Flight Facility in Virginia. The sounding rocket and its USU thruster payload will reach a maximum altitude of 100 km and will experience zero gravity for more than five minutes.

During this time, the thruster will deliver multiple pulses totaling 15 to 20 seconds of burn time. Such in-flight measurements have never been obtained for this class of hybrid rocket system.

As a risk mitigation activity, NASA Marshall Space Flight Center in Huntsville, Ala., has provided an additional $30,000 from its Dual-Use Technology Program for ground-based vacuum tunnel testing of the thruster and plume contamination sensors. Testing at MSFC will occur during a six-week period this summer.

“This is an exciting project in that USU undergraduate students will perform the majority of design, fabrication and testing as part of their capstone senior design course,” said Whitmore. “Students will gain invaluable industrial experience working with the NASA safety review and launch integration teams, and will get to see the unforgettable experience of watching a payload they built rocket off and disappear into the sky.”

The payload will splash down and be recovered in the Atlantic Ocean more than 60 km downrange from its initial launch point. The team will analyze the payload and multiple aspects of the mission to determine how much plume contamination the new motors generate.

Flight operations will be run by the NASA Sounding Rocket Operations Contract (NSROC). USU faculty and students will work directly with NSROC to integrate the payload. On launch day, NSROC will manage launch operations, but it's anticipated the USU team will attend the launch with several key payload team members sitting in the mission operations center.