More established automakers will likely will have a reliability advantage over Tesla, which has struggled with quality problems on its current models. 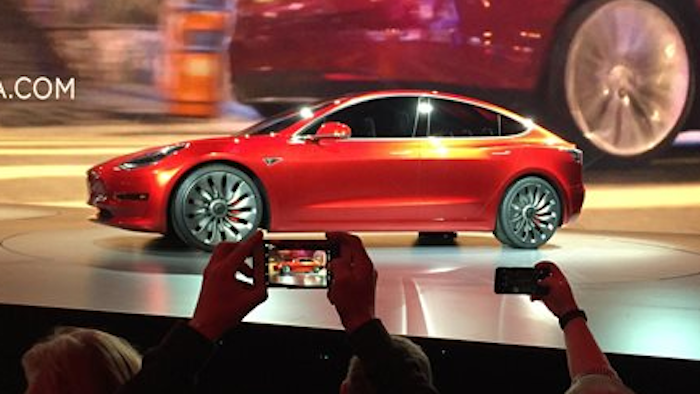 In this March 31, 2016 file photo, Tesla Motors unveils the new lower-priced Model 3 sedan at the Tesla Motors design studio in Hawthorne, Calif. More than 276,000 people pre-order the Tesla Model 3 in less than a week. Is it the “Tesla phenomenon,” or has the $35,000 electric car with a range of 200-plus miles taken finally taken the electric car to the masses.
AP Photo/Justin Pritchard

DETROIT (AP) — Demand for Tesla's new Model 3 has been eye-popping, with consumers pre-ordering about $13.7 billion worth of the electric sedans nearly two years before they go on sale.

Yet experts aren't yet ready to proclaim it's a tipping point with mainstream America moving from burning gasoline to charging batteries.

The reason? Most of the 325,000 people worldwide who put down $1,000 deposits are tech-savvy, environmentally conscious early adopters who see Tesla as an innovative brand that meets their needs. The $35,000 price tag and the Model 3's 215-mile range are important, but the brand's tech image and CEO Elon Musk's success in cars, rockets and solar panels are the main drivers.

"We're tech people. I want integration with my phone," says Charles Butler, a 40-year-old manager with a cloud computing company in Austin, Texas, who was among the first to make an order. "Musk and Tesla, that's what they do with their customer experience."

Researchers say other automakers' electric cars haven't caught on because their range is limited to around 100 miles. And even General Motors' Chevrolet Bolt, which will go more than 200 miles per charge and is priced similarly to the Model 3, won't attract a frenzy of buyers because Chevy doesn't have Tesla's tech image, they say.

Surveys by the University of California Davis Institute of Transportation Studies and by Carnegie Mellon University show that Butler is a pretty typical Tesla buyer. The brand is well-known in the U.S., even among those who don't plan to buy electrics. Tesla buyers always have rated cutting-edge features — huge touch screens, freeway autopilot and over-the-air software updates — as paramount, said Tom Turrentine, director of electric and hybrid vehicle research at UC Davis.

Early electric cars didn't have those features, although the new Bolt will have some of them.

"There's a big overlap in people who think about the future and green technology," Turrentine said. "Tesla is really sitting right on that."

Surveys by Carnegie Mellon show that getting from the tech savvy to regular folks will take a lot. Most U.S. consumers don't even know what an electric car does, said Jeremy Michalek, a professor of engineering and public policy. Electric cars currently are only 1 percent of U.S. sales.

"Winning over the enthusiast is just fundamentally different from winning over mainstream consumers," he said.

Turrentine doesn't expect similar demand for the Bolt, which is due to hit showrooms late this year. Chevy won't comment on the Tesla orders, and it isn't taking advance orders for the Bolt. Instead, it will rely on GM's vast dealer network, high owner satisfaction with the Volt plug-in hybrid, and Internet connectivity to drum up Bolt sales, a spokeswoman said.

That may not work well, however. UC Davis research shows that when asked to name rechargeable cars, "hardly anybody can name a Volt, but they can name a Tesla," Turrentine said.

Surveys also show that GM and other automakers don't have the tech panache of Tesla .

"I just do not believe when you're a large automaker, you're necessarily going to solve for that," says Butler.

Yet Tesla is about to face more competition. Sam Abuelsamid, senior analyst for the Navigant research firm, said other automakers are scrambling to unveil 200-mile electric cars in the same price range.

More established automakers likely will have a reliability advantage over Tesla, which has struggled with quality problems on its current models, he said.

Still, all automakers face a "chasm" that must be bridged between early adopters and the public for electric cars to be in every driveway, Turrentine said. It will take years of influence from early buyers to change a country in which gas-powered pickup trucks are the top-selling vehicles, he said. Also needed will be more battery breakthroughs for lower costs, and continued government incentives, he said.

There are other problems that could make it hard for Musk to satisfy his orders. The volume — which surprised even Musk — will be difficult for Tesla to produce. The company has been a niche manufacturer, selling just 110,000 cars since it started manufacturing at a California plant in 2008. Even Musk seems to be wondering. On Twitter, he said he may have to rethink production plans and open a factory in Europe.

Tesla also has a history of missing deadlines for previous models, and delays could turn away some buyers. Last week, the company blamed parts shortages from a supply company for production shortfalls with the new Model X SUV and pledged to make sure the same thing doesn't happen with the Model S.

"After a while you have a pattern that things get delayed," said Standard & Poor's analyst Efraim Levy.

Another possible bug is the $7,500 federal tax credit for electric car buyers, which could reach its 200,000 limit for Tesla buyers and be phased out before many of those who ordered can get it. Tesla says in a statement that it will make sure customers know when the credits expire.

"We build our vehicles, including Model 3, to offer compelling value without any incentives," the statement said.