Pod could "change the entire dynamic for human habitation" in space.

Marcia Dunn
In this Wednesday, Jan. 16, 2013 photo made available by NASA, NASA Deputy Administrator Lori Garver and Robert T. Bigelow, president and founder of Bigelow Aerospace, stand next to the Bigelow Expandable Activity Module (BEAM) during a news conference in Las Vegas. It’s a technology demonstration meant to pave the way for moon bases and Mars expeditions, as well as orbiting outposts catering to scientists and tourists.
Bill Ingalls/NASA via AP

It's a technology demo meant to pave the way for moon bases and Mars expeditions, as well as orbiting outposts catering to scientists and tourists in just a few more years. Bigelow Aerospace is behind the experiment, which will get a ride to the International Space Station with another private space company.

An unmanned SpaceX Falcon rocket is set to launch late Friday afternoon, carrying a capsule full of supplies with the pioneering pod in its trunk. It will be SpaceX's first station delivery since a launch accident halted shipments last June.

Once attached to the station, the soft-sided Bigelow compartment will be inflated to the size of a small bedroom. The Bigelow Expandable Activity Module, BEAM for short, will stay there for two years — with astronauts occasionally ducking in. It will be the first time an astronaut steps inside an expandable habitat structure in space.

"It's not just historic for our company, which obviously is the case, but I think it's historic for the architecture," said Robert Bigelow, founder and president of Bigelow Aerospace and owner of Budget Suites of America.

As a precursor to larger systems, Bigelow said BEAM could "change the entire dynamic for human habitation" in space. He hopes to have a pair of private space stations ready for launch by 2020.

In the meantime, companies— even countries — are clamoring to put their own experiments inside the empty BEAM, Bigelow said in an interview with The Associated Press on Thursday. If everything goes well, that next commercial step could happen in perhaps six months, he said.

The North Las Vegas-based company won't divulge the material used for BEAM's outer layers — or even how many layers — just that the layers are spread out to absorb and break up any penetrating bits of space junk. Back when NASA was working on the technology in the 1990s, a combination of Nextel, Kevlar, foam and other fabric formed the multilayer shield.

Congress canceled TransHab in 2000 and Bigelow Aerospace bought the patent from NASA. The company launched a pair of expandable spacecraft a decade ago from Russia as an experiment. Called Genesis I and II, they're still orbiting.

NASA, meanwhile, paid Bigelow Aerospace $17.8 million for the upcoming test flight, making the BEAM the most affordable module ever launched to the space station, said Michael Gold, director of operations and business growth for Bigelow Aerospace.

Expandable habitats like BEAM, officials noted, need to be just as strong — or stronger — than the standard metal cylinders that make up the current space station. BEAM has proven to be equal or better against space debris than metal, said NASA project manager Rajib Dasgupta.

Bigelow goes as far as to say: "The aluminum cans are antiquated."

Bigelow said BEAM is nothing like a balloon — "it's not going to go bang" — or even a football. Think steel belts in a car tire. "It's pretty novel."

The beauty of expandable habitats is their compactness for launch. BEAM will travel in the Dragon capsule's unpressurized compartment; the space station's big robot arm will grab the structure and attach it to a berthing port. BEAM will expand four times in volume when it is inflated in late May or early June, with a little station air at first, then special inflation tanks.

BEAM has been bundled up for more than a year — it should have flown last fall, but was delayed by the SpaceX rocket grounding. Bigelow stressed that the main purpose is testing and engineers don't know now how well it will work after being compressed for so long.

The chamber will stay put for two years, providing measurements on radiation, impact resistance and temperature. Astronauts will venture inside four or so times a year to inspect surfaces, collect air and microbial samples, and change out sensors. Otherwise, the hatch will remain sealed.

After two years, BEAM will be cut loose, eventually burning up on re-entry.

Bigelow Aerospace has plans for a much larger expandable habitat B330, providing 11,654 cubic feet (330 cubic meters) of internal space, the size of a couple of buses. The company hopes to launch two of the B330s around 2020, providing opportunities for companies, schools, countries outside the space mainstream, and NASA, too, if it likes. In an artist's rendering, the two habitats are linked in orbit. Then there's the company's envisioned Olympus, a supersize space station-hotel combo.

NASA, meanwhile, imagines inflatable modules at Mars awaiting astronauts traveling in the traditional Orion spacecraft that is hooked up with inflatable compartments to ease the eight-month, one-way journey.

"It's an important piece to the human space exploration puzzle," Gold said. "Regardless of where you go, you need a place to live and work." 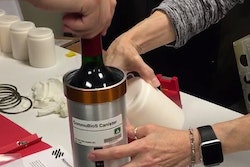