The feature interprets what's in a picture using a form of artificial intelligence that recognizes faces and objects. 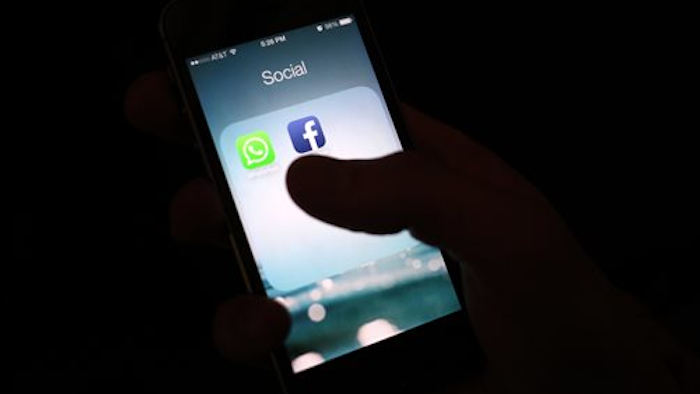 This Feb. 19, 2014, file photo shows the Facebook app icon on an iPhone in New York. A feature rolling out Tuesday, April 5, 2016, on Facebook's iPhone app interprets what's in a photo using a form of artificial intelligence to recognize faces and objects for blind and visually impaired people as they scroll through the pictures posted on the world's largest online social network.
AP Photo/Karly Domb Sadof, File

MENLO PARK, Calif. (AP) — Facebook is training its computers to become seeing-eye guides for blind and visually impaired people as they scroll through the pictures posted on the world's largest online social network.

The feature rolling out Tuesday on Facebook's iPhone app interprets what's in a picture using a form of artificial intelligence that recognizes faces and objects. The iPhone's built-in screen reader, VoiceOver, must be turned on for Facebook's photo descriptions to be read. For now, the feature will only be available in English.

The descriptions initially will be confined to a vocabulary of 100 words in a restriction that will prevent the computer from providing a lot of details. For instance, the automated voice may only tell a user that a photo features three people smiling outdoors without adding that the trio also has drinks in their hands. Or it may say the photo is of pizza without adding that there's pepperoni and olives on top of it.

Facebook is being careful with the technology, called "automatic alternative text," in an attempt to avoid making a mistake that offends its audience. Google learned the risks of technology last year when an image recognition feature in its Photos app labeled a black couple as gorillas, prompting the company to issue an apology.

Eventually, though, Facebook hopes to refine the technology so it provides more precise descriptions and even answers questions that a user might pose about a picture.

Facebook also plans to turn on the technology for its Android app and make it available through Web browsers visiting its site.

The Menlo Park, California, company is trying to ensure the world's nearly 300 million blind and visually impaired people remain interested in its social network as a steadily increasing number of photos appear on its service. On an average day, Facebook says more than 2 billion photos are posted on its social network and other apps that it owns, a list that includes Messenger, Instagram and WhatsApp.

Until now, people relying on screen readers on Facebook would only hear that a person had shared a photo without any elaboration.

Driverless Cars Give the Blind Hope