The area, and the entire Northeast, has no law outlining how the technology should be driven and tested. 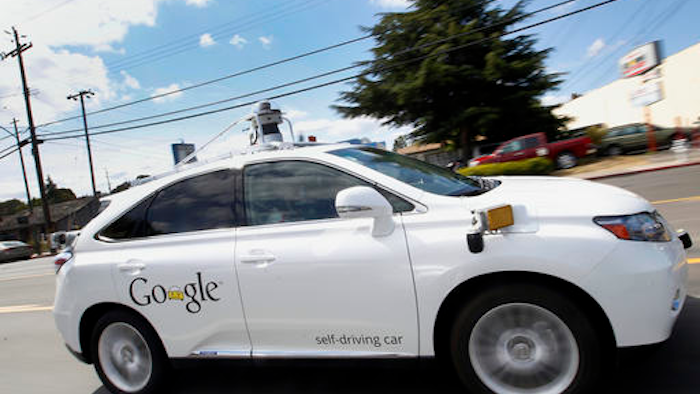 While the Boston region is a center for robotics and artificial intelligence research, none of the Northeast states allows self-driving cars to be driven or tested on public roads. But Massachusetts officials are looking in 2016 at turning part of the former Devens military base into a self-driving testing ground.
AP Photo/Tony Avelar, File

PROVIDENCE, R.I. (AP) — With its Colonial-era street patterns, icy winters, notoriously aggressive drivers and high-tech talent, the Boston region would seem the perfect place to test self-driving cars and ensure they can handle anything thrown at them.

But the area, and indeed the entire Northeast, has no law outlining how the technology should be driven and tested. And lawmakers who want to respond are being spurned by leaders of the fast-growing industry, who would rather have no rules than a patchwork of state laws getting in their way.

That's leaving local startups and some of the country's most renowned engineering departments in a bind.

"I'm hoping that the New England states will make it possible for us to do this work right at home very soon," said Daniela Rus, a professor who directs the artificial intelligence laboratory at the Massachusetts Institute of Technology, which has partnered with Toyota to advance autonomous driving. "We have more flexibility testing our algorithms and self-driving vehicles in Singapore than we do here. It's really onerous to pack up your research and move to a place to test it."

In the absence of clear rules, researchers are welcoming an emerging Massachusetts plan by the administration of Republican Gov. Charlie Baker to carve out a self-driving testing ground at a former military base an hour's drive from Boston, which is a center for robotics and artificial intelligence research.

But state lawmakers in New England and elsewhere hoping to further boost innovation by letting driverless vehicles on public streets and highways have been getting a clear message from large companies competing to build the vehicles of the future: We don't want or need your permission right now.

"In the absence of a law prohibiting such testing, you do not need a law permitting testing," Wayne Weikel, of the Alliance of Automobile Manufacturers, told Rhode Island senators at a Tuesday hearing on a bill that would allow self-driving vehicles in the state.

Democratic Sen. Joshua Miller, who introduced the legislation, had thought the smallest state would be a perfect place to test the vehicles. Its assets include Quonset Point, a state-owned former naval base that is home to a high-performance driving school and a major auto importation port. But companies that found out about the legislation swiftly opposed it — especially its provision that would require a human operator for testing.

Google, Volkswagen and Weikel's lobbying group — which represents 12 of the biggest traditional automakers — sent letters to Rhode Island lawmakers this week saying the bill sent the wrong signal and is a disincentive to research. They've raised similar objections to laws proposed in Connecticut and other states, arguing that lawmakers should wait until the federal government creates national guidelines.

U.S. Transportation Secretary Anthony Foxx has said those guidelines are coming before the end of the year.

"Rhode Island would lose nothing by giving this process time to play out," wrote Ron Barnes, head of state legislative affairs for Google Inc. and its parent company Alphabet Inc., in a letter to state senators.

But in neighboring Massachusetts, engineers and scientists who now mostly work with computer simulations of autonomous driving say they don't have time to wait as real-world testing advances elsewhere.

"I would prefer that there would be rules so we wouldn't be guessing what was allowed and what wasn't allowed," said Roger Matus, of Boston artificial intelligence software startup Neurala Inc.

Simulations can't capture all the unpredictable conditions of traveling down a city street, he said.

"In Boston, it would be the pothole in the road or the person who darts out from behind a bus," he said. "Those are the things that need to be tested in order to make self-driving cars work right."

Massachusetts is heeding the concerns of researchers and auto industry companies with a two-pronged approach, said Katie Stebbins, the state's assistant secretary of innovation, technology and entrepreneurship.

One is to study and create rules that address safety concerns without getting in the way of researchers, she said. The other is to open up the former Fort Devens as a fake city for self-driving cars based on similar sites near the University of Michigan and at a former naval weapons base in California.

The Army base, which closed 20 years ago this month, is occupied by businesses and homes but still has hundreds of acres of available space. The quasi-public agency that manages the property is now in early talks with undisclosed entrepreneurs, academic institutions and companies about developing it as a testing site.

Four states — Nevada, California, Michigan, Florida — have passed laws allowing and regulating the testing of self-driving cars. Arizona does so via executive order.

Nearly 20 other states have pending legislation, many of them based on "clumsy or anachronistic definitions" of vehicles and drivers, said Bryant Walker Smith, a law professor at the University of South Carolina who has written about how states can promote self-driving research and development.

The legislation in Massachusetts is unique, he said, and "seems to have been crafted with a good deal of customization — or thought — that sets it apart."