NASA and Boeing working to design a longer, thinner, and lighter wing much different from typical commercial aircraft. 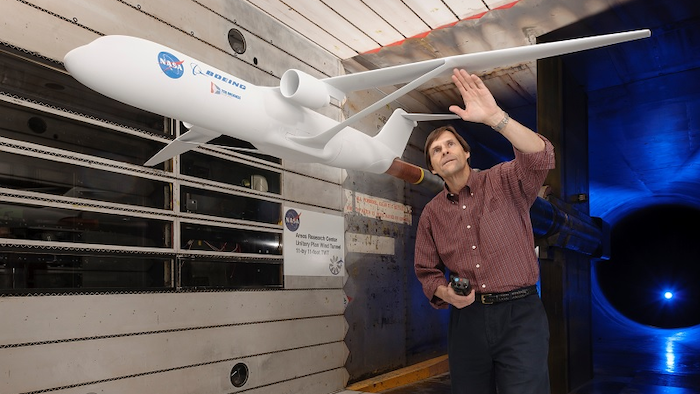 Every bit of weight on an aircraft increases the fuel, emissions and money required to put it in the air.

NASA and Boeing have been working together to design a longer, thinner and lighter wing – so different from typical commercial transport aircraft wings that it requires a brace, or truss, to provide the wing extra support.

Researchers expect the lighter weight, lower drag truss-braced wing to reduce both fuel burn and carbon emissions by at least 50% over current technology transport aircraft, and by 4 to 8% compared to equivalent advanced technology conventional configurations with unbraced wings.

The wind tunnel model tested has a 50% greater wingspan than a comparable aircraft with current wing technology. Engineers are using detailed computer modeling of aerodynamics to iterate the design.

Using computational results showing how air would flow around the model, they modify the dimensions and shape of the wing and truss to improve areas that may generate undesirable air flow that would increase drag and reduce lift.

Then engineers test models in a wind tunnel using multiple experimental techniques to validate the computations and aircraft performance predictions.

NASA and Boeing engineers are analyzing results from the recent test and plan to further explore the wing design. The truss-braced wing is part of NASA’s Advanced Air Transport Technology project, which addresses the challenge of developing energy efficiency improvements to reduce emissions and perceived community noise dramatically without adversely affecting safety.

Every U.S. aircraft uses NASA-developed technology. The agency is committed to transforming aviation by reducing its environmental impact, maintaining safety and revolutionizing aircraft shapes and propulsion.