For eight years, federal officials have funded the development of an electronic trace detection system, but it might not be field tested until the fall. 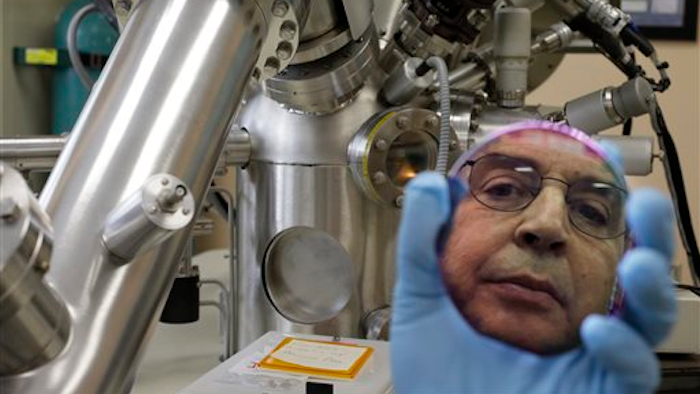 In this Tuesday, Jan. 26, 2016 photo, University of Rhode Island engineering professor Otto Gregory is reflected in a silicon wafer that contains sensors to detect explosives, in front of a thin film surface analyzer in a laboratory on the school's campus, in Kingston, R.I. He has developed a sensor that detects the explosive used in the Paris bombings, to try to stop future attacks. Gregory compares his sensor to a dog’s nose, the gold standard in explosives detection. It "sniffs" the air for vapors emitted from explosives.
AP Photo/Steven Senne

NEW YORK (AP) — The Department of Homeland Security must move faster to test explosive detectors that can sense compounds that have been used in recent extremist attacks and to determine if the devices can be installed at airports and train stations across the country, U.S. Sen. Charles Schumer said.

For about eight years, federal officials have funded the development of the electronic trace detection system, which would be capable of continuously monitoring an area for vapor from explosives, including the bomb-making material TATP. But while the technology has proved successful in laboratory tests, it hasn't been scheduled for government field tests until the fall.

"It is now clear it is the go-to explosive that ISIS uses, so we ought to not waste a minute and get it tested in real-life situations," the New York Democrat told The Associated Press in an interview Saturday, using an acronym for the Islamic State group. "It has real potential ... but we have to get on the move and see if it really works."

TATP, formally known as triacetone triperoxide, is relatively easy to make with materials that are readily available in pharmacies and hardware stores, experts say. Even small quantities can cause large explosions.

Otto Gregory, a chemical engineering professor at the University of Rhode Island, developed the technology for the electronic trace detection system and said the work is now at the stage of "packaging" the devices to make them portable. Homeland Security has been funding Gregory's project since 2008, paying $80,000 to $100,000 annually, he said.

So far, he said, two field tests have been scheduled — one at a Federal Aviation Administration training site in Atlantic City, New Jersey, and another at a port in Savannah, Georgia. But they won't happen until the fall. Gregory doesn't know the specific dates.

"We've been pushing as hard as we can push," he said in a recent interview.

Schumer said Homeland Security officials need to work faster to begin field tests and do all they can to roll out the technology as soon as possible. He also wants assurances from the department that New York City will be one of the first places where the detectors are installed.

Homeland Security did not immediately respond to a request for comment on the test schedule. John Verrico, a spokesman for the agency's research and development arm, said there are no "current projects planned or in the works to field test TATP detection at airports."

TATP has been used in several attacks, including by the Islamic State group in the Nov. 13 Paris attacks, where attackers packed it into their suicide vests and wielded assault rifles, killing 130 people. The explosive compound was also found in the apartment where the assailants linked to the Brussels attacks were living.

Some law enforcement agencies use specially trained "vapor wake" detection dogs to identify the scent of explosives on people moving through crowded concourses. Experts have said no technology has been capable of matching the 200 million olfactory sensors in a dog's nose.

But the electronic sensors wouldn't need training or breaks, as dogs do. Only about 130 dogs have gotten the patented training nationwide since its development about a decade ago, and only one dog in Europe has had the training.