Solar systems that don't just optimize a home, but an entire neighborhood. 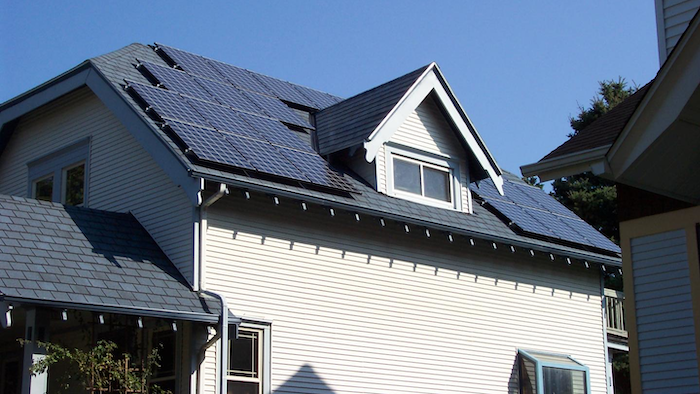 A residential use of solar energy in Wisconsin is pictured.
Matt Montagne, courtesy of Oregon State University

Part of the future of solar energy, especially for residential use, may be small “community-based” systems in which neighbors join together in the construction and use of solar systems to optimize the energy produced in their neighborhood – and share in the benefits.

New research by engineers at Oregon State University indicate that an optimal development of neighborhood solar energy might increase the total electricity produced by 5-10 percent, a significant gain by the standards of solar energy efficiency. At the same time, it can reduce the variability and unpredictability of the solar resource.

With this approach, the use of various rooftops and land used for solar energy production may vary from house to house, depending upon such issues as the home’s orientation, roof slope and shading from trees or other structures. Quite simply, some structures lend themselves better than others to solar energy.

“An approach such as this makes the most sense in a neighborhood where there’s a lot of variation in terms of sun and shadow, and the orientation of buildings,” said Mahmoud Shakouri, a doctoral candidate in the OSU College of Engineering.

“The conventional approach to residential solar energy is to look at each home as an individual package, building its own solar system whether or not that’s a good location. But by grouping 10 or 20 houses in a neighborhood, all of whose owners are interested in solar energy, we can optimize the use and placement of solar panels and let everyone share in the savings.”

The idea has been considered for some time, Shakouri said, but failed to generate much headway in the United States due to limited interest in solar energy, high initial costs, and tax credits or incentives that fail to recognize this approach to optimizing the solar resource.

Findings on this issue have been published recently in the journals of Applied Energy and Data in Brief, and a “decision support model” has been created that homeowners could use to help consider the best options for their neighborhood. Free software to help implement such a strategy is also available from the U.S. Department of Energy. Collaborating on this research was Hyun Woo Lee at the University of Washington.

Initial solar installations can be expensive, making it all the more important to maximize the long-term output of the systems. But such systems are also durable and pollution free, usually with a performance guarantee of up to 25 years, using a technology that produces no greenhouse gases.

Residential energy use is also a big-ticket item – in the United States, the building sector accounts for 40 percent of total energy consumption, and residential buildings consume more than half of the energy in the building sector. By 2035, the federal government estimates that 74 percent of the energy consumed in residences will be in the form of electricity, even as two thirds of the nation’s electricity is still produced by coal or natural gas that are helping to cause global warming.

The new approach developed at OSU, Shakouri said, actually borrows formulas from economic theory. This approach has long been used in the stock market in the form of portfolio investment, to maximize profit while reducing risks. Given the high initial cost of some solar systems – averaging about $20,000 for a 4 kilowatt residential system – reducing risk is of considerable value to many people interested in the technology.

Studies done at OSU included a case study of collaborative solar energy among 24 homes in a neighborhood in Corvallis, Ore., which has sunny summers but often-cloudy and rainy winters, not exactly the nation’s best bet in terms of solar energy production. Even there, this approach increased the annual electricity output of the homes by 4.6 percent and reduced the volatility in electrical output by 4.3 percent.

Use of approaches such as this may become more common as the efficiency of solar technology improves, more people become aware of its potential, and legislation or policies are changed to better enable community solar projects, researchers say. More work is also needed to determine how to contractually share expenses, profits and benefits among cooperating neighbors.