Engineers Develop Smart Conveyor Rollers for Factory of the Future

Researchers want to turn the motors inside of every roller into a sensor. 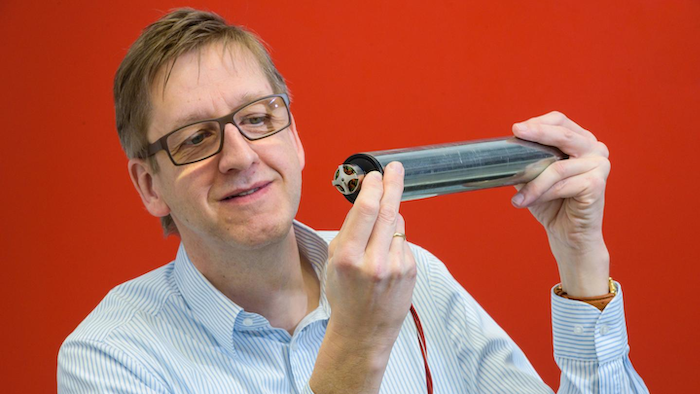 Engineers in Saarbrücken are currently developing smart conveyor rollers that communicate with one another. The drive systems specialist Matthias Nienhaus from Saarland University is collaborating with partners to turn the motor inside every drive roller into a sensor.
Oliver Dietze

To improve the speed and reliability with which goods are transported to their destinations, engineers in Saarbrücken are currently developing smart conveyor rollers that communicate with one another.

The drive systems specialist, Matthias Nienhaus from Saarland University, is collaborating with partners to turn the motor inside every drive roller into a sensor. When the conveyor is running, the drive motors continuously generate data, which allows the rollers to be precisely controlled and thus respond to changing operating conditions.

These intelligent roller conveyor systems can identify new routes if a fault arises or can flag up certain conditions, such as when there is space in a box for more cans. The project partners intend to test the system at a large distribution center.

The project team will be showcasing the technology at Hannover Messe from April 25th to April 29th. The team will be exhibiting at the Saarland Research and Innovation Stand in Hall 2, Stand B 46.

Whether it's a pallet load of beer crates, the parcel with the pullover you ordered, the suitcase in the baggage handling system or a can of soup on its way through the factory, roller conveyors are used to transport all manner of things from A to B.

Roller conveyor systems often form part of production lines where items are moved from one machine to the next so that they can be filled, processed, sorted, distributed or simply transported safely to their destination.

These systems represent a significant logistical challenge, one that involves the complex interplay of numerous subsystems and one where there is a lot that can go wrong.

A fault with only a few of the thousands of conveyor rollers can lead to an entire production line grinding to a halt or to suitcases ending up in the wrong plane. Today's roller conveyor systems are also restricted to predefined routes making them quite inflexible as a result.

The team, which comprises the research group led by Professor Matthias Nienhaus at Saarland University as well as partners from Saarland University of Applied Sciences and industry, is working on a novel approach to the types of networked production systems envisaged in the Industry 4.0 framework.

"Our focus is on the individual roller, which we equip with a drive motor and an intelligent controller. We are developing and testing methods that enable us to gather data from the drive motors," explains Nienhaus. His own research is centered on the specialist field of miniature electromagnetic motors and microdrive systems with power ratings ranging from a tenth of a watt to several hundred watts.

As the system under development does not require any additional sensors, such as position sensors, it is remarkably inexpensive. There is therefore no risk of sensitive sensors becoming damaged or becoming unable to generate a signal for some reason.

The researchers at Saarland University measure signals from specific locations in the motor, such as those that indicate the distribution of the magnetic field strength. An electromagnetic field is generated when electric current flows through the three coils located within the outer ring of rotating permanent magnets.

Knowing how this magnetic field varies when the motor rotates provides the engineers with detailed information about the drive. The measurement data is used by the research team to compute the position of the rotor and to infer important information about the performance of the motor. "By analyzing this data, we are able to control the motor in a very efficient manner," explains Nienhaus.

If one of the rollers is not rotating properly because the bearing is worn, or if a short circuit has knocked out one of the coils, the magnetic field generated by the motor will change and this will be immediately registered by the system. "The data we gather enables us to detect even very small changes," says Nienhaus.

The system is able to detect any deterioration in the performance of a roller early on. The engineers perform calculations and experiments to determine how the measurement data correlates with specific motor states. The results are stored in the system's brain - a microcontroller that processes the data in real time.

The thousands of individual rollers in the roller conveyor system interact with one another via the network operating system that is integrated into each roller. The rollers can communicate with each other and can therefore respond flexibly whenever an unexpected condition arises. Unlike conveyor systems with a centralized external controller, each conveyor roller 'knows' by itself how to respond at any given time. This makes it possible to build roller conveyor systems that can do new things.

"By analyzing angular momentum data we can draw conclusions about the weight of a box currently being transported and decide whether or not another package could be added to the box," explains Nienhaus. "We want to develop the transport system to a stage where it can move freely on the ground."