It was used for decades in the manufacture of Teflon pans, Gore-Tex jackets, ski wax, carpets and the linings of pizza boxes and microwave popcorn bags, but now the suspected cancer-causing chemical PFOA is being phased out in the U.S.

Mary Esch
In this Friday, Feb. 26, 2016 photo, a sign outside the Petersburgh Municipal Complex informs residents of water distribution times in Petersburgh, N.Y. PFOA, long used in the manufacuring of Teflon pans, Gore-Tex jackets, ski wax, and many other products has turned up in the water in factory towns around the country like Petersburgh, impacting drinking water.
AP Photo/Mike Groll

ALBANY, N.Y. (AP) — Prized for its ability to make things super-slick, it was used for decades in the manufacture of Teflon pans, Gore-Tex jackets, ski wax, carpets and the linings of pizza boxes and microwave popcorn bags.

Now, with the suspected cancer-causing chemical PFOA being phased out in the U.S., it is still very much around, turning up in the water in factory towns across the country — most recently in upstate New York and Vermont — where it is blamed by residents for cancers and other maladies.

The latest cases have brought renewed demands that the Environmental Protection Agency regulate PFOA the way it does arsenic, lead and dozens of other contaminants, and set stringent, enforceable limits on how much of the substance can be in drinking water.

"Where is the government that is supposed to protect people and the environment? It's an outrage," said Tracy Carluccio of the Delaware Riverkeeper Network, which uncovered PFOA, or perfluorooctanoic acid, in tap water in New Jersey a decade ago.

In their defense, EPA officials said that the agency has been considering for years whether regulations are needed for PFOA and related perfluorinated chemicals, but that it is a drawn-out testing and evaluation process dictated by the federal Safe Drinking Water Act. In the meantime, the EPA has taken action around the country to fine companies and force them to clean up such chemicals.

For now, there are no mandatory limits on how much PFOA, also called C8, can be in drinking water. The same goes for its cousin perfluorooctane sulfonate, or PFOS, which is being checked for at 664 U.S. military sites where it was used in firefighting foam.

As part of its review of such chemicals, the EPA ordered nationwide testing of water supplies in 2013.

Of 4,764 water supplies, 103 systems in 29 states had trace amounts of PFOA, but none exceeded 400 parts per trillion, EPA's advisory level for short-term exposure — water you drink for only a few weeks. Seven had levels slightly over 100 ppt, the new advisory level for long-term exposure — for the water you drink for years — that the EPA is expected to set this spring.

But the EPA's national survey didn't tell the whole story.

Towns the size of Hoosick Falls, New York, whose water supply serves just 4,500 people, weren't included in the testing. Its PFOA level of 600 ppt was discovered in village wells in 2014 only because residents, concerned about what they perceived as a high cancer rate in the plastics factory town, demanded testing.

In January, after the lead crisis in Flint, Michigan, focused national attention on water contamination, EPA and New York officials warned people in Hoosick Falls not to drink the water. The state is promising a new water supply with a price tag of $10 million.

More recently, testing turned up PFOA at about 100 ppt in drinking water in nearby Petersburgh, New York, and North Bennington, Vermont, which also had plastics plants.

Michael Hickey, a local insurance underwriter, exposed the contamination in Hoosick Falls, a bucolic community near the Vermont state line known as the hometown of folk artist Grandma Moses.

"My father died of kidney cancer. My grandmother had kidney cancer," Hickey said. "My concern isn't really about me; it's about my 5-year-old son."

At the least, health and environmental advocates say, communities that have factories and other installations that used the chemical should test their water.

"I would consider it an urgent priority to decrease exposures," said Philippe Grandjean, a researcher at the Harvard School of Public Health who believes the 100 ppt safe-exposure level EPA is proposing is still 100 times too high.

Vermont health officials, for example, have set that state's PFOA level at 20 ppt, based on the same research the EPA is relying on.

Class-action lawsuits have been filed as far back as 2001 against companies such as 3M and DuPont over PFOA contamination of water near factories or disposal sites in a host of communities, including Decatur, Alabama, and Cottage Grove, Minnesota.

In settling a lawsuit involving 70,000 people in West Virginia and Ohio, DuPont agreed in 2004 to install filters to remove PFOA from water systems in six communities surrounding its Parkersburg, West Virginia plant. In October, DuPont was found liable for a woman's kidney cancer in the first of 3,500 lawsuits filed by people with diseases they blame on the contamination.

The American Water Works Association, a water industry group, believes that nationwide regulation of PFOA isn't needed but that testing for the substance at manufacturing sites would be prudent, spokesman Greg Kail said.

Advanced filtration systems to remove PFOA can cost millions of dollars up front, plus tens of thousands a year in operating costs.

3M invented the chemical 1947, and it became so ubiquitous that more than 98 percent of Americans have traces in their blood, according to the Centers for Disease Control and Prevention. 3M began to phase it out in 2002 in response to health concerns raised by the EPA. DuPont and eight other companies later agreed to do the same by 2015.

Studies funded by the DuPont settlement concluded PFOA is a "probable cause" of six illnesses, including thyroid disease and kidney and testicular cancer. Those studies were based on people who drank water with PFOA at a level of 50 ppt for a year — half what the EPA is expected to set as the safe level. Other studies have linked PFOA to low birthweight and other problems in children.

New York Gov. Andrew Cuomo warned that PFOA and other chemicals will probably be discovered in the water across the state and country.

"We allowed waste disposal in fashions that, in retrospect, were not prudent," he said, "and now, in many ways, we are paying the price as a society." 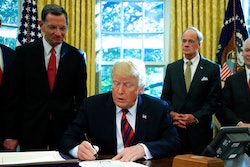