Nanomotors May Help Electronics Fix Themselves

Inspired by the body's immune system, nanomotors could find and repair problems in electronic systems. 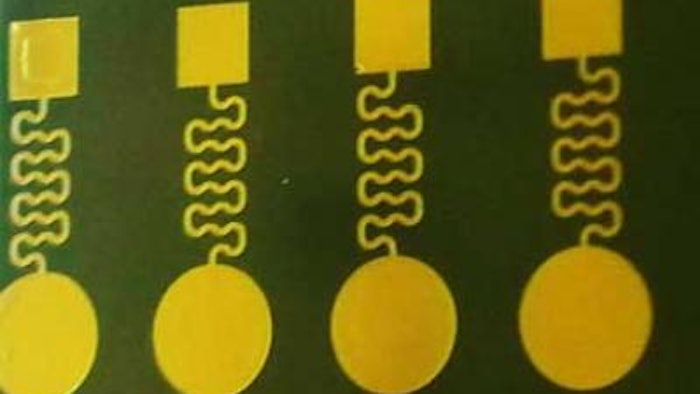 Gold circuits and other electronic components could one day be healed by self-propelled nanomotors.
Wang lab (UCSD)

As electronics grow ever more intricate, so must the tools required to fix them. Anticipating this challenge, scientists turned to the body's immune system for inspiration and have now built self-propelled nanomotors that can seek out and repair tiny scratches to electronic systems.

They could one day lead to flexible batteries, electrodes, solar cells and other gadgets that heal themselves.

The researchers present their work today at the 251st National Meeting & Exposition of the American Chemical Society (ACS). ACS, the world's largest scientific society, is holding the meeting here through Thursday. It features more than 12,500 presentations on a wide range of science topics.

"Electronic circuits are very sophisticated these days," says Jinxing Li. "But a crack, even an extremely small one, can interrupt the flow of current and eventually lead to the failure of a device. Traditional electronics can be fixed with soldering, but repairing advanced electronics on a nanoscale requires innovation."

Gadgets will soon be more ubiquitous than ever, appearing in our clothes, implants and accessories, says Li, a Ph.D. candidate in the lab of Joseph Wang, D.Sc., at the University of California at San Diego. But finding ways to fix nanocircuits, battery electrodes or other electronic components when they break remains a challenge.

Replacing whole devices or even parts can be tricky or expensive, particularly if they're integrated in clothes or located in remote places. Creating devices that can fix themselves would be ideal, according to Wang, whose lab develops nanoscale machines. To work toward this goal, his lab and others have turned to nature for ideas.

"If you cut your finger, for example, platelets will automatically localize at the wound location and help start the healing process," Li says. "So what we wanted to do is create and use extremely small robots to perform the same function, except in an electronic system."

To accomplish this, Wang's team collaborated with the group of Anna Balazs, Ph.D., who is at the University of Pittsburgh. They designed and built nanoparticles out of gold and platinum that are powered by hydrogen peroxide. The platinum spurs the fuel to break down into water and oxygen, which propels the particles.

Testing showed that the nanomotors zoomed over the surface of a broken electronic circuit connected to a light-emitting diode, or LED. When they approached the scratch, they got lodged in it and bridged the gap between the two sides. Because the particles are made of conductive metals, they allowed current to flow again, and the LED lit up.

Li says the nanomotors would be ideal for hard-to-repair electronic components such as the conductive layer of solar cells, which are subject to harsh environmental conditions and prone to scratching. They could also be used to heal flexible sensors and batteries, which the Wang lab is also developing.

Additionally, the same concept with different materials and fuels could be used in medical applications for delivering drugs to specific locations. The lab is also developing new nanomotors that could potentially be deployed in the body to treat different diseases, such as stomach infections.