The 2016 Honda Fit holds its value, but what's inside the design? 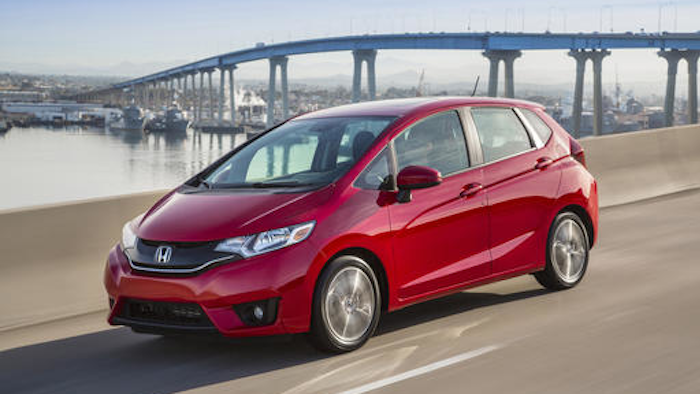 While the fit and finish of the test-driven Fit was up to snuff inside and out, the car wasn't a quiet, plush ride. Plenty of road noise made it inside the car and the horsepower from its four-cylinder gasoline engine topped out at 130.
AP

The 2016 Honda Fit is a satisfying little hatchback that pairs the cargo space of an SUV and more backseat legroom than many sedans with the fuel efficiency of a subcompact, at up to 41 mpg.

At only 13.3 feet long, the Fit is also a recommended buy of Consumer Reports magazine, which lists its reliability as above average.

The starting manufacturer's suggested retail price, including destination charge, is $16,725 for a model with a six-speed manual transmission and $17,525 for one with CVT. This includes standard rearview camera with moving guidelines that project where the car is headed as it backs up, Bluetooth hands-free phone connectivity, LED taillights and automatic-on headlights.

Even with every available factory feature added in, such as power moonroof, leather seat trim, a navigation system, 7-inch display touchscreen, keyless entry and push-button start, the Fit tops out at only $22,000.

The Fit also holds its value. ALG ranks the 2016 Fit tops among subcompacts like the Toyota Yaris and Nissan Versa for resale value.

While the fit and finish of the test-driven Fit was up to snuff inside and out, the car wasn't a quiet, plush ride. Plenty of road noise made it inside the car and the horsepower from its four-cylinder gasoline engine topped out at 130.

But the 1.5-liter direct-injection four-cylinder and the well-engineered transmissions make the most of every bit of power that's generated, so the Fit is sprightly.

The Fit's continuously variable transmission was tailored for responsive driving and acceleration and doesn't strangle the power the way CVTs do in many other cars, so its peak torque of 114 foot-pounds at 4,600 rpm comes on readily. There weren't the loud droning sounds that characterize other CVTs, either.

Better still, even with demanding driving that wasn't focused on saving fuel, the test-driven model managed nearly 34 mpg in combined city/highway travel. This is just 1 mpg less than the average 35 mpg rating of the federal government. Highway-only travel is rated by the federal government at 41 mpg in Fits with the CVT.

The Fit's gas tank is small, at 10.6 gallons, which meant the test-driven car could go just 360 miles on a single tank. At today's average price for regular unleaded as measured by America's oldest auto club, AAA, the cost to fill the tank was less than $20.

The gas tank is small is because it's designed not to impinge on interior space, and this is where the Fit excels.

The floor in the back seat is flat, and seat cushions in Honda's 60/40 split "Magic Seat" back there fold up against the seatbacks to provide nearly 4 feet of vertical space for standing up tall plants and paintings inside.

Putting the seat cushions down and folding down the Fit's rear seatbacks like an SUV's results in an SUV-like 52.7 cubic feet of space — enough to hold bicycles or a small couch. You won't believe it until you try it.

Passengers enjoy a surprisingly spacious-feeling interior, as front legroom maxes out at 41.4 inches — almost as much as the 41.6 inches in the mid-size Toyota Camry sedan.

There's also a generous 39.3 inches of legroom in the Fit's back seat, which is more than the Camry's 38.9 inches. Plus, the Fit has more front-seat headroom than the Camry does.

The steering in the test-driven model had a light feel, and visibility was good all around. But the ride, while softened a bit in this, the third-generation Fit, still is on the stiff side and allows some road bumps to be felt by passengers.

Some Fit owners complain about the lack of lumbar in the seats; others dislike that the radio controls on uplevel Fits don't have knobs for tuning and volume.

Last October, the 2016 Fit was part of a U.S. safety recall because rear grab handle brackets might puncture the car's curtain air bags during deployment, thereby reducing the safety protection provided by the bags.