The company has not yet put a vehicle on the market, but has broken ground on the site of its $1 billion planned factory.

Michelle Rindels
“The FFZERO1 Concept is an amplified version of the design and engineering philosophies informing FF’s forthcoming production vehicles,” said Richard Kim, head of design, Faraday Future. “This project liberated our designers and inspired new approaches for vehicle forms, proportions and packaging that we can apply to our upcoming production models.”
Faraday Future

An electric carmaker that was granted up to $335 million in incentives to build a factory in Nevada said this week it will put up a $75 million bond so taxpayers aren't on the hook if its planned car factory goes belly-up.

Executives for Faraday Future sent a letter to Nevada officials this week promising to help guarantee some of the $120 million in public investments in infrastructure at the Apex Industrial Park in North Las Vegas. Faraday would be released from that bond obligation once it builds 1.6 million square feet of its factory and starts making car sales.

"Your commitment provides full security for Nevada and allows this important set of projects to move forward," Gov. Brian Sandoval responded in a letter dated March 3.

Faraday expects to employ 4,500 people at its North Las Vegas factory once it hits full production.

State Treasurer Dan Schwartz said he still has questions about whether the company will be able to raise the money for the bond and for the project overall. He's responsible for issuing state bonds to finance road improvements, a rail port and water service — all expected to attract other companies to the underdeveloped Apex and raise new tax revenue that would pay back the state-issued bonds.

If the expected new tax revenue didn't materialize, Nevadans could see their taxes increase to cover the cost of the infrastructure. Schwartz said he won't issue state bonds unless Faraday posts its $75 million guarantee, and assured Nevada taxpayers that they wouldn't be stuck with the bill.

"I am confident that the bonds we issue will be paid, and their taxes will not go up because of the bonds that we issue for Apex," Schwartz said in an interview Friday.

The company, which unveiled a concept car in January but has not yet put a vehicle on the market, already broke ground on the site of its $1 billion planned factory.

"The speed at which you are moving forward with your operation is a clear sign of the seriousness of your investment in our state and this facility," Sandoval wrote.

Still, Schwartz said he's still monitoring the situation to see if Faraday can come up with the needed cash. He noted that there's a freeze until May 7 on trading shares of Leshi, the Chinese company of Faraday's main backer Jia Yueting.

"I think it's pretty clear they don't have the money right now," Schwartz said. "Faraday has to go out and raise the money, and a lot depends on their ability to go and do that."

Faraday spokeswoman Stacy Morris said Friday that Jia is personally funding the company and Leshi is not its money source, as Schwartz had said in a statement Friday. She added that Faraday is independent and its business operations are continuing uninterrupted.

Nevada lawmakers approved a $335 million incentive package in December that includes about $215 million in tax breaks for the company and $120 million in infrastructure improvements at Apex.

The deal for the upstart Faraday is structured more conservatively than a larger incentive package approved in 2014 for more-established carmaker Tesla, mainly to shield taxpayers from risk if Faraday can't make good on its promises. Faraday is not allowed to claim all of its incentives until it meets certain investment benchmarks.

The company also said it will put $13 million into an escrow account to cover engineering plans and possibly early-phase infrastructure construction at Apex. Governmental entities could draw on the money, but it would be reimbursable to Faraday Future once state bonds are issued. 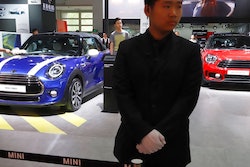 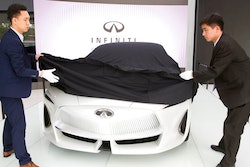 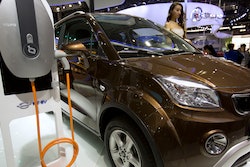