Automakers are pouring billions of dollars into creating electric models for China, the biggest market for the technology. 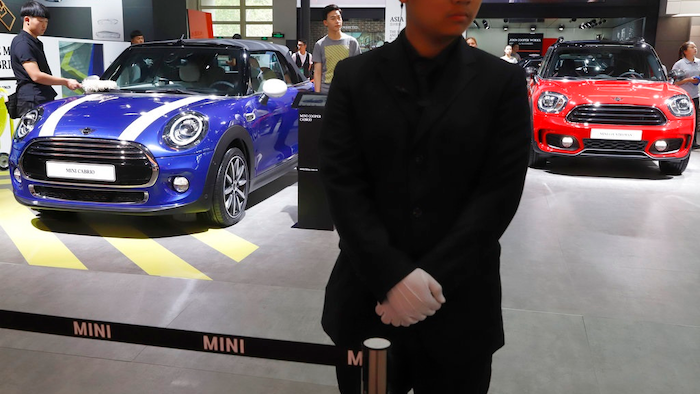 The companies said they signed an agreement Monday during an event in Berlin attended by Chinese Premier Li Keqiang and German Chancellor Angela Merkel.

BMW and Great Wall said their venture, Spotlight Automotive Ltd., also will make electrics for the Chinese partner's brand. Great Wall put total investment in the venture at 5.1 billion yuan ($770 million) and said it is aiming for annual production of 160,000 vehicles.

Automakers are pouring billions of dollars into creating electric models for China, the biggest market for the technology.

Beijing is using access to its market as leverage to induce global automakers to help Chinese brands develop battery and other technology.

Auto brands in China are required to make electric vehicles at least 10 percent of their sales starting next year or buy credits from competitors that exceed their quotas. Later, they face pressure to raise those sales in order to satisfy fuel efficiency requirements that increase annually.

Sales of pure-electric passenger vehicles in China rose 82 percent last year to 468,000, according to an industry group, the China Association of Automobile Manufacturers. That was more than double the U.S. level of just under 200,000.

"With our joint approach, we can quickly scale up production and increase efficiency," said Klaus Frolich, a BMW board member, in a statement.

MINI's first battery electric model is due to be produced at its main British factory in Oxford in 2019, according to BMW.

China is BMW's biggest market. The Munich-based automaker said about 560,000 BMW brand vehicles were delivered to Chinese customers in 2017, more than its next two markets — the United States and Germany — combined.

China was MINI's fourth-largest market in 2017, with 35,000 vehicles delivered, the company said.

The electrics venture with BMW is an important boost for Great Wall, which industry analysts warned would struggle to satisfy Beijing's sales quotas due to its fuel-guzzling vehicle lineup and had yet to announce any significant electric plans.