The company apologized for the violation, and has reviewed all test procedures.

In an internal audit, the company found that "a limited number of personnel" at its delivery center in Italy had acted against instructions and the company's "code of conduct."

Wartsila on Monday apologized for the violation and said it had since reviewed all test procedures, adding that the deviations were on average 1 percent of fuel consumption and affected about 2 percent of all engine deliveries.

The Helsinki-based engineering group employs some 19,000 people in more than 70 countries. 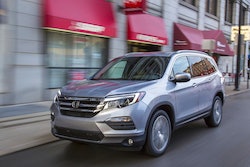