Obama Launches 'Take Your Child to the Lab' Week

More than 50 national labs are opening their doors to 5,000 students to expose them to the scientists, engineers, and lab employees. 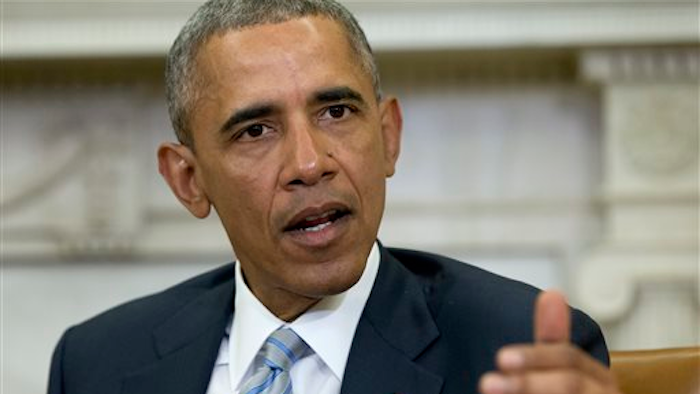 In this Feb. 17, 2016 file photo, President Barack Obama speaks in the Oval Office of the White House in Washington. Obama is launching a version of “take your child to work day” focused on America’s science laboratories instead of its corporate workspaces. It’s part of Obama’s long-standing effort to encourage young people, especially girls and minorities, to pursue careers in the STEM fields of science, technology, engineering and math.
AP Photo/Carolyn Kaster, File

President Barack Obama is launching a version of "take your child to work day" that's focused on America's science laboratories instead of its corporate workspaces.

It's part of Obama's effort to encourage young people, especially girls and minorities, to pursue careers in the fields of science, technology, engineering and math.

More than 50 national labs in 20 states are opening their doors this week to approximately 5,000 elementary, middle and high school students to help spark interest by exposing them to the scientists, engineers and lab employees who carry out important work and research at facilities in their communities.

The students, including from communities aligned with Obama's "My Brother's Keeper" initiative, will participate in mentoring sessions, hands-on experiments and other activities. My Brother's Keeper is a public-private initiative started by Obama to help boys and young men of color stay on the right path. The White House Council on Women and Girls is also involved.

"National Week at the Labs" coincides with February's end of Black History Month and the start of Women's History Month in March.

"It's an exciting time to think about how we're pulling all the children of our country into technology and STEM and the jobs of the future," Megan Smith, chief technology officer in the Office of Science and Technology Policy at the White House, told The Associated Press in a telephone interview.

She said some 600,000 U.S. technology jobs, which pay significantly higher than the average salary, are currently unfilled.

At the White House on Monday, elementary school students from Baltimore and the District of Columbia are expected to participate in a science fair-type event.

Obama says it's good for the country when young people are excited about science.

"Whether it's setting foot on the moon, developing a vaccine for polio, inventing the Internet or building the world's strongest military, we've relied on innovative scientists, technologists, engineers and mathematicians to help us tackle the toughest challenges of our time," he recently told Popular Science magazine. "Being pro-science is the only way we make sure that America continues to lead the world."

Obama started the annual White House Science Fair because he said budding scientists should be celebrated as much as Super Bowl football teams. The administration is also more than halfway toward his goal of training 100,000 new math and science teachers by 2021, he said.

"We want the next game-changing industry or life-saving breakthrough to happen right here in the United States," he said.