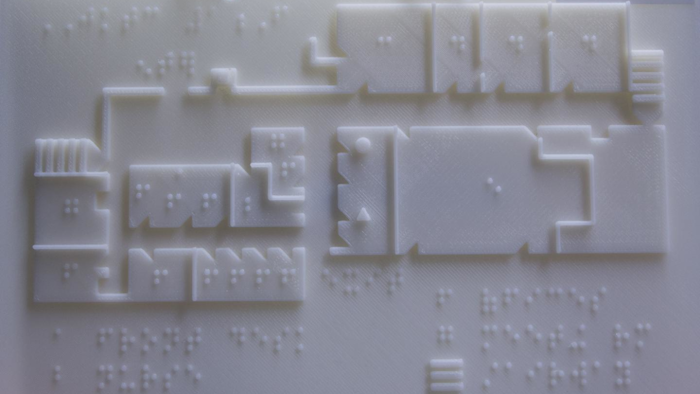 A portable and durable 3-D-printed tactile map with braille for the Joseph Kohn Training Center in New Brunswick.
Cameron Bowman

The three plastic tactile maps are for each floor at the Joseph Kohn Training Center, a state-funded facility for the blind and visually impaired in New Brunswick. And the goal is to print maps for all of the center's students.

"It was a very fulfilling experience," said Jason Kim, 25, a senior mechanical engineering student in the Department of Mechanical and Aerospace Engineering in Rutgers' School of Engineering. "I learned a lot. The most difficult part was trying to imagine what it would be like to be blind myself so I could better tackle the problem, and it opened my eyes to the whole visually impaired and blind community."

Howon Lee, an assistant professor in the Department of Mechanical and Aerospace Engineering whose research focuses on 3D printing, said the maps are a form of GPS for the blind and visually impaired.

"Design, using this technology, practicing -- everything is important -- but I think what is more important is to put yourself in their shoes," Lee said.

Joseph Kohn Training Center staffers lauded the durable maps, saying they would be very helpful for center students. The center has clunky, old wooden maps with a few braille labels on walls.

Professor Lee said he got the idea of making 3D maps after visiting the Korea Institute of Science and Technology in South Korea. The institute created educational materials for small children with a 3D printer, and he was impressed.

A 3D printer -- very similar to an inkjet printer -- uses computer-aided design software. The technology was developed in the 1980s, but advancements have accelerated in the last five years, Lee said.

"Instead of printing letters on top of a 2-diminensional sheet, you just do this over and over again, layer upon layer, until you have a final 3-dimensional product," Lee said.

The Joseph Kohn Training Center gives blind and visually impaired people a chance to learn largely vocational skills so they can become independent. The intensive, 20-week training program is free for New Jersey residents. Students, who are at least 18 years old, gain the skills needed to attend college, find jobs or become independent homemakers. Training takes place on weekdays, and the center has overnight residential space for 24 people.

When someone suffers a loss of vision, learning how to better use the senses -- hearing, touch, taste and smell -- for day to day living is the largest adjustment, according to the center.

Kim said he approached Professor Lee last spring, looking for a summer project that would help the community.

"I had just learned how to use SolidWorks [3D modeling computer-aided design software] and so this summer project would be a great way to exercise a skill I had just acquired, just for the community," Kim said. "He told me about this opportunity and I thought it was perfect."

Lee launched the project and Kim jumped in. Both men knew nothing about braille, so they had a steep learning curve.

They visited the center several times to get feedback from faculty and students. They finished designing the map near the end of last summer.

"One of the things we saw with conventional braille printed on paper is that it doesn't last long," Lee said.

The new maps -- made with state-of-the-art 3D printers at Rutgers -- are a little larger than a small computer tablet. They're in a binder so students can easily carry them for reference. They also have a legend, or guide, in braille, a feature missing from prior maps. The legend helps limit the amount of map training needed.

Lee said there's only one copy of the maps so far and the goal is to lower map-making costs so every student at the training center gets a map on day one.

As for the future, Lee said he's interested in developing 3D maps of the Rutgers' campuses and the city of New Brunswick.

The idea is to "give freedom, extended freedom, to navigate and go from one place to another without worrying too much," he said.

Your Grandparents Need a 3D Printer