Sensor detects the kind of explosive used in the Paris bombings to try to stop future attacks. 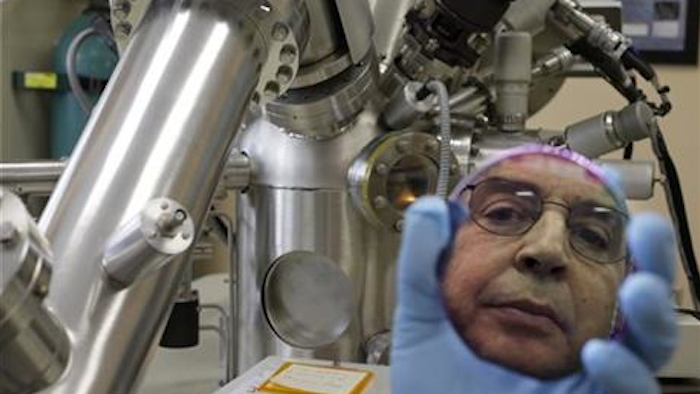 In this Tuesday, Jan. 26, 2016 photo University of Rhode Island engineering professor Otto Gregory is reflected in a silicon wafer, that contains sensors to detect explosives, in front of a thin film surface analyzer, behind, in a laboratory on the school's campus, in South Kingstown, R.I. He has developed a sensor that detects the explosive used in the Paris bombings, to try to stop future attacks. Gregory compares his sensor to a dog’s nose, the gold standard in explosives detection. It “sniffs” the air for vapors emitted from explosives.
AP Photo/Steven Senne

A University of Rhode Island professor has developed a sensor that detects the kind of explosive used in the Paris bombings, to try to stop future attacks.

Professor Otto Gregory compares his sensor to a dog's nose, the gold standard in explosives detection. It "sniffs" the air for vapors emitted from explosives.

Inside his laboratory, Gregory is evaluating how well his sensor detects triacetone triperoxide. The Paris attackers packed TATP into their suicide vests and wielded assault rifles, killing 130 people Nov. 13.

TATP was also used in the 2005 London bombings, which killed 52 commuters, and by Richard Reid, who tried unsuccessfully to detonate a bomb in his shoe during a trans-Atlantic flight in 2001.

TATP is relatively easy to make, and the materials are readily available in pharmacies and hardware stores, experts say. Even small quantities can cause large explosions. The U.S. Department of Homeland Security began funding Gregory's work through a center for explosives research in 2008.

His sensor is designed to continuously monitor an area, unlike a quick swab of a hand or of luggage at the airport to screen for particulates from explosives. It doesn't need training or breaks, as bomb-sniffing dogs do.

"Think of it as an electronic dog's nose that would run 24/7," said Gregory, a chemical engineering professor.

Homeland Security created a center of excellence for explosives experts to collaborate and improve the nation's response to threats, called the ALERT, or Awareness and Localization of Explosives-Related Threats, Center.

"You can't have a dog everywhere," Silevitch said. "The more we can screen vulnerable targets, the better off we're going to be."

The sensor measures the energy that's released as a molecule as an explosive breaks down. Nanowires in the sensor act as a catalyst to cause that decomposition so the explosive can be detected. The system also measures the electrical properties of the catalyst as it interacts with the explosive vapor, as a second check.

It detects both nitrogen-based and peroxide-based explosives, Gregory said. He envisions it being affixed inside a Jetway or an entrance to a nightclub, stadium, subway or other public space, triggering an alarm if explosives are detected.

The first prototype would cost roughly $1,000 to $2,000, Gregory said. He's working on a hand-held version he estimates would cost several hundred dollars, and he's talking with companies interested in licensing it.

A Homeland Security spokeswoman said she couldn't comment on the project until it's complete.

Northeastern University in Boston, Massachusetts, leads the agency's ALERT Center. The University of Rhode Island is a partner. Gregory receives $80,000 to $100,000 annually for his sensor research through the center.

Jimmie Oxley, the technical lead at URI for the center, said there's nothing exactly like it on the market today. A spokesman for Smiths Detection in London, a leading designer and manufacturer of sensors that detect and identify explosives, confirmed Gregory's technique is different than its own systems.

Gregory said he has four patents on the technology.

To test the sensor, Gregory and his team put TATP onto filter paper and blow gas over it. The vapor travels through pipes to two of the sensors. Each sensor looks like a SIM card for a mobile phone, though it's about half that size. Data is fed into a computer.

Gregory is searching for the point at which the sensor can't detect an explosive because it's too diluted. So far, it can find one molecule of an explosive in a billion molecules of air, he said. He's also trying to make sure the sensor won't trigger false alarms.

Gregory plans to test it at an FAA testing facility this year, then on cargo containers at the port in Savannah, Georgia. The sensor would need governmental approvals before it could be deployed.