NFL Considers Use of Video on Sideline Tablets

By next season, quarterbacks might be able to view video of all plays on their sideline Microsoft Surface tablets as the NFL considers taking another significant step forward in terms of technology and the game. 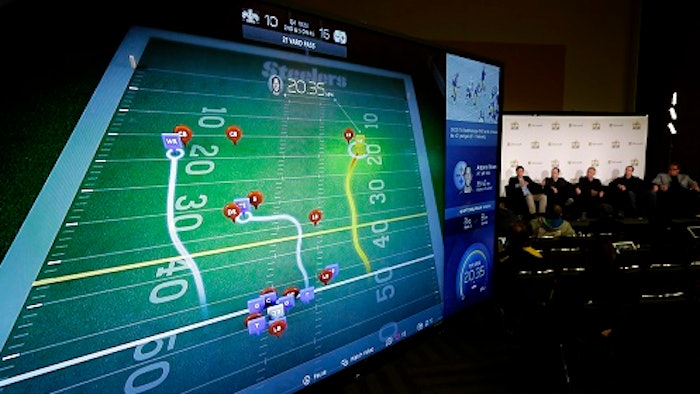 SAN FRANCISCO (AP) — Back when Joe Montana played, he viewed grainy photos of formations between series that were sent to the sideline from the press box attached to a wire with a metal clip.

By next season, quarterbacks might be able to view video of all plays on their sideline Microsoft Surface tablets as the NFL considers taking another significant step forward in terms of technology and the game.

Brian Rolapp, the executive vice president of media for the NFL, said that after tests in the preseason and Pro Bowl there are no technological hurdles preventing teams to be able to have access to video during the game by next season.

The main question remaining: Will the competition committee and owners decide it's a useful change that does not take away from the strategy or competitive balance of the game?

Players are excited about the possibilities. New Orleans quarterback Drew Brees said the improvements in efficiency with the sideline tablets has been immense since they started being used three years ago.

Instead of looking at two black-and-white photos from pre- and post-snap, he now has access to four clear color shots on the tablet that also include two pictures taken during the play. He is able to easily scroll between plays and draw directly on the tablet to make adjustments in patterns and protections with teammates.

Using the video capabilities in last year's Pro Bowl won Brees over on that technology as well. He saw one play when Pittsburgh's Antonio Brown ran a route behind a defender. He showed Brown the play and told him to run in front the next time they called the play. Two series later, that same call resulted in a touchdown.

"Without the video I wouldn't have been able to see that and communicate it with him," Brees said. "Obviously that directly affected the performance of what we were able to accomplish."

That kind of technology was something Montana never could have imagined when he played. He had to lug around heavy playbooks and do his film study on projectors at the team facility instead of on tablets at home or on airplanes.

"Things have changed a lot, as fast as they get things on the sideline and how many different views there are," he said. "It's a lot better, especially for the quarterback."

Another issue is how to handle any potential problems with the technology that prevent one team from using it during a game. When the headset communication system from the press box to the sideline breaks down for one team, the other is not allowed to use it.

When there are problems with the coach-to-quarterback helmet speaker once the game has started, that is not the case.

In the AFC championship game last month, the New England Patriots were temporarily without photos on their sideline tablets because of a connectivity issue. It was resolved.

"What happened in the AFC championship was nothing related to the Surface tablet but had everything to do with the connectivity and the bandwidth in the building," Rolapp said. "From everything we have seen, they have worked flawlessly."

Microsoft also showed off three ideas submitted by fans for new technology as part of the Imagine Bowl. The first expands on the RFID chips worn by players to give teams and fans more information about how fast and far players run, and other data that could help determine when players are fatigued and more susceptible to injury.

There is a stadium app that offers fans at games information about lines, concessions and can access other game information such as videos.

The third is a small camera attached to the equipment to provide the actual view a player sees during the game.