How Would Engineers Build the Golden Gate Bridge Today?

And how has the design held up over the past 80 years?

Maria Martinez de Lahidalga de LorenzoHota GangaRao
The Golden Gate Bridge is a suspension bridge, meaning it relies on cables and suspenders under tension along with towers under compression to cross a long distance without any intermediate supports.

Ever since the Golden Gate Bridge opened to traffic on May 27, 1937, it’s been an iconic symbol on the American landscape.

By 1870, people had realized the necessity of building a bridge spanning the Golden Gate Strait to connect the city of San Francisco with Marin County. However, it was another half-century before structural engineer Joseph Strauss submitted his bridge proposal. The plans evolved, and the final project was approved as a suspension bridge that ended up taking over four years to build.

When the Golden Gate Bridge went up, it was the longest suspended bridge span in the world – cables hold up the roadway between two towers, with no intermediate supports. And the setting had a number of inherent challenges. It cost about US$37 million at the time; building the same structure today would cost about a billion dollars. So how has the design held up over the past 80 years – and would we do things differently if we were starting from scratch today?

Longest Suspension Bridge in the World

The Golden Gate Bridge is a suspension bridge, meaning it relies on cables and suspenders under tension along with towers under compression to cross a long distance without any intermediate supports. The roadway deck hangs from vertical suspenders that connect to the two main cables that run between the towers and the anchors on the end. The suspenders transfer vehicular forces and self-weight to the supporting cables that are anchored to towers and on to solid ground.

The first bridges of this type probably connected two cliffs with flexible ropes to cross a valley or a river. Hundreds of years ago, these ropes were made of plant fiber; iron chains came later. The Brooklyn Bridge in New York City, opened in 1883, was the first to use steel cables, which then became standard.

The towers likely started as a simple rock on each side of a valley; eventually engineers used massive stone or steel piers. The Golden Gate Bridge, for instance, is supported by one abutment on each end and the two towers, which are placed over foundations embedded in the seafloor.

The Golden Gate Bridge’s two supporting cables are about the only thing that has not been changed since the bridge was opened to traffic in 1937. Each main cable is formed by 27,572 steel wires with the approximate thickness of a pencil. Construction crews hung nearly 80,000 miles of wire cables from one side of the bridge to the other.

It’s nearly impossible to manufacture a long, thick cable in one piece with no flaws to do this job. And crucially, if a single big cable was holding the bridge up and something happened to it, there would be a catastrophic failure. Relying on smaller wires means any failure would be slower, leaving time to divert disaster.

Since people first started pondering a bridge in the bay of San Francisco, there was huge concern about the structure’s ability to withstand the location’s strong winds, turbulent waters and possible earthquake forces. San Francisco is located at the intersection of two active tectonic plates – obviously no one wanted to see an earthquake bring down the bridge, which currently carries around 112,000 vehicles per day.

To avoid this problem, the builders also located shock absorbers at each end of the bridge to absorb the energy coming from wind or seismic forces. These specially designed vibration dampers are meter-diameter cylinders made of a lead core covered by rubber. Placed at strategic locations, they absorb energy that could otherwise cause the bridge to collapse.

Keeping It In Good Shape

Conventional wisdom would suggest an infrastructure project is done soon after its inauguration. But keeping the Golden Gate Bridge in tiptop form requires ongoing stringent maintenance. For 80 years, dedicated maintenance crews have serviced the bridge, repainting and substituting the corroded or broken components where necessary.

This work must be done to exacting standards. For example, when any of the thousands of bolts that connect all the various pieces of the bridge need replacement, no more than two are taken out simultaneously, to keep the bridge safe against strong winds or earthquakes forces.

There are structural maintenance issues, too. Due to the passage of time and ongoing temperature variability, the cables and suspenders elongate or contract, and need periodical checking and retensioning. This type of adjustment is referred to as “tuning” and is similar to how a musician keeps a stringed instrument sounding its best.

Due to huge upkeep costs, some people have suggested reconstructing the Golden Gate Bridge in a way that would limit ongoing maintenance and operation bills. Setting aside the political feasibility, how would engineers design the bridge if they were going to build it from scratch today?

Over time, researchers have developed lighter materials. Using Fiber Reinforced Polymers (FRPs) rather than steel or concrete is a way to reduce the weight of a structure of this magnitude. This self-weight is typically responsible for using up 70 to 80 percent of its resistence – that’s the maximum load it can bear before it fails. By reducing it, the bridge’s structure would need less strength, allowing for cheaper and easier options.

For example, designers have started using Fiber Reinforced Composite (FRP) materials in bridges such as the Market Street Bridge in West Virginia. FRP uses a plastic resin to bind together glass or carbon fibers, which give strength to the material. Being four times lighter than concrete, the FRPs are five to six times stronger.

Probably a designer’s first target for change in a substitute Golden Gate Bridge would be the composition of the cables. The steel currently in use is corrosive, heavier by four times than newer materials and can fail in harsh moisture and temperature environments – just like those it encounters in this location. Carbon cables are more inert and already in use around the world.

These lighter-than-steel materials could also be utilized in other elements of the bridge, such as the traffic roadway. Using plastic composite decking could bring the Golden Gate Bridge’s deck self-weight down by a factor of five. That would enable engineers to design and construct a cable-stayed bridge rather than a suspension bridge. The advantage there would be the ability to do away with the suspenders; in a cable-stayed bridge forces are transmitted directly from the deck to the towers by the cables. The first highway cable-stayed bridge with CFRP cables is Switzerland’s Stork Bridge, opened in 1996.

A cable-stayed bridge can have a longer span than a suspension bridge, so its structure between the supports and the shore could be simpler. Also building the towers nearer to the shore, where the waterbed is more shallow, would help alleviate one of the main problems when the Golden Gate Bridge was constructed the first time around: It’s very difficult and expensive to work on the tower foundations in deep water with strong currents.

The damping system could also be addressed with a new design. The lead core-based dampers that were used in the construction of the Golden Gate could be replaced by newer technologies that are better able to resist wind, traffic and seismic forces. This improvement would ensure that a failure such as the one on the Tacoma Narrows Bridge – when wind blew the bridge sideways, it twisted and collapsed – would be prevented.

With all that said, the Golden Gate Bridge is still doing fine. Even with other feasible and cheaper options, no one is realistically working to replace the Art Deco icon and its world famous “international orange” paint job. The Golden Gate Bridge is closely monitored to make sure it does not exceed its stress limits due to traffic, wind and seismic loads. We can look forward to at least another 80 years of this engineering masterpiece. 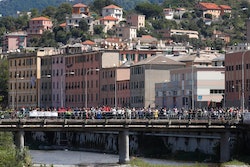 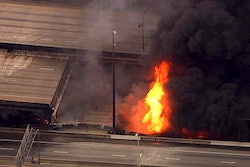